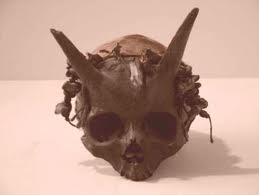 Those who study the bizarre are probably familiar with the following story of a famous unsolved mystery, which goes:

In the late 1800s in Sayre, Pennsylvania, a burial mound was excavated by Dr. George Patterson Donehoo, a noted historian, author, and expert in native American history.  Assisting Donehoo were two acclaimed professors; A.B. Skinner of the American Investigating Museum, and W.K. Moorehead of the Phillips Academy in Andover, Massachusetts.  These men discovered skeletons which measured seven feet in length, but even more incredible were horn-like projections which protruded from the skull's forehead.  Donehoo estimated that the burial ground dated to the year 1200.

The skeletons were sent to the American Investigating Museum in Philadelphia and were allegedly stolen shortly thereafter.  The bones of these horned giants haven't been seen since.

At least that's the story which has been published in many books, like Matt Lake's Weird Pennsylvania and Sue Crawford's Mysteries of the Unexplained.

Sayre, which is located at the confluence of the Chemung and Susquehanna rivers, was home to the now-extinct Native American tribe known as the Susquehannock.  Not surprisingly, Susquehannock mythology and folklore is full of stories about giants.  One such legend is that of the great hunter known as WaTash:

"It is told that the great WaTash hunted with a bow he made as well as a gun he traded from the early European settlers. Legends, hieroglyphs, historical portraits, statues and explorer descriptions of his race tell us that they stood above all others in height and ability. Great was he and great were his people."- Legend of the WaTash, by Sheila Ogle. (http://www.womenhunters.com/watash-ms-outdoors.html)

Even Captain John Smith (of Jamestown, Virginia fame) wrote about the unusual height of the Susquehannock in his journal between 1607 and 1609: "60 of those Susquehannocks came to us...such great and well proportioned men are seldome seene, for they seemed like giants."  Smith goes on to describe the proportions of the chief: "The calfe of whose leg was of a yard around and all the rest of his limbes so answerable to that proportion that he seemed the goodliest man we ever beheld!"

Ethnologists believe that the Winnebago, who settled in the Midwest, originated on the East Coast (the Algonquians referred to the Winnebago as "the people of the sea").  A popular icon in Winnebago mythology is Red Horn, a horned hero.  The myth states that Red Horn battled with giants, and eventually takes a giantess as a bride.  Perhaps this Winnebago legend describes the creation of the race of horned giants uncovered by Dr. Donehoo.

In his 1912 book Tales of the Bald Eagle Mountains, historian Henry Shoemaker writes about a seven-foot tall statue of a Susquehannock princess carved from flint which was discovered in 1865 near McElhattan (pp. 208-211), not far away from where the horned giant skeletons were discovered.

All signs point to the fact that these giants were actual living people and not the work of an overactive imagination.  The story seems to end at the close of the 19th century when the skeletons discovered by Donehoo were lost.  Or does it?

One of the professors who accompanied Donehoo was Warren King Moorehead of the Phillips Academy in Andover.  The Phillips Academy, founded in 1778, is still one of the most prestigious boarding schools in America.  Former students include George Bush, George W. Bush, John Kennedy Jr., and other men who comprise America's elite aristocracy.  Moorehead was the first curator of the Robert S. Peabody Museum of Archaeology (Peabody himself was an alum of the Phillips Academy) and would eventually come to be known as the "Dean of American Archaeology".

Moorehead was an ambitious young man when he accompanied Dr. Donehoo to Sayre; he would not be named curator of the Robert S. Peabody Museum until a few years later in 1901.  He was born into considerable wealth and grew up in Ohio, where he developed an interest in Native American archaeology.  His family was disappointed by Warren's ambitions; they considered "digging up bones" to be an insult to the family name.  His widower father, who, like Dr. Donehoo, was a Presbyterian minister, pressured Warren into entering the family business.

Despite being born into wealth and privilege, Warren had to overcome many obstacles in his early life.  His mother's death, his father's disapproval of his career ambitions, and his lackluster performance as a student, just to name a few.  Warren dropped out of Denison University in 1887 and self-financed his own excavations.  His work caught the attention of Dr. Thomas Wilson of the Smithsonian Institution, who arranged for Moorhead to return to school at the University of Pennsylvania in Philadelphia.

In Philadelphia, Moorhead studied under the great (but controversial) paleontologist Edward Drinker Cope, whose famous feud with O.C. Marsh turned Cope into a national celebrity.  Moorehead also craved celebrity of his own, and left school once again to pursue a career writing and lecturing.  He eventually found work as a professor at Ohio State University, but it did not pay very well.

Archaeology was a new science back then, which led to practices that would seem immoral and unprofessional by today's standards.  Most archaeologists financed their research and travel by selling their own artifacts, an action that would be illegal today.  Moorehead tried turning to his wealthy relatives for money, but they turned him away.  To make matters worse, he developed tuberculosis and once again found himself out of a job.  Adding insult to injury, his pet project (creating an atlas of burial mounds) was completed by his OSU assistant, who attached his own name to the finished atlas.

Moorehead returned to Philadelphia and appealed to a wealthy artifact collector for help.  That man turned out to be Robert Singleton Peabody.  Peabody paid for Moorehead's medical treatment and was instrumental in getting Moorehead a position at the Phillips Academy in Andover.  Moorehead was so thankful that he named his second son Singleton Peabody Moorehead.

This is where things get interesting.

A short while after the bones of the horned giants were stolen, Moorehead's life had turned completely around, as if by magic!  When Peabody decided to use his immense wealth to build a museum on Phillip's Academy grounds, Moorehead was appointed curator, despite his lackluster academic career.

Maybe Donehoo reminded Moorehead of his own Presbyterian minister father, or maybe Moorehead saw Donehoo as a simple country rube, history doesn't say.  History doesn't say much about the American Investigating Museum, either.  There appears to be no historical evidence that suggests Skinner's museum even existed.

Perhaps Moorehead and Skinner sold the artifacts to a wealthy artifact collector like Robert Peabody.  After all, Moorehead's financial situation completely turned around after the excavation, and around the same time a company was founded in Keene, New Hampshire (only 73 miles away from Andover) called the A.B. Skinner Company.  Records show that this company was a "dealer in carpets, dry goods, jewelry, etc."  Were they also dealing archaeological artifacts?  Locals referred to the large A.B. Skinner store as "The Museum", so it's possible.  By the way, did we mention that one of the founders of Keene, New Hampshire was a Peabody?

At the alleged time of Donehoo's discovery, Moorehead was jobless, moneyless, and recovering from tuberculosis as well as recovering from having credit for his atlas stolen from him.  It's been said that the religious Donehoo, after discovering the horned giants, immediately concluded that they were descendents of the Biblical giants referred to in the Old Testament as Nephilim.  Might such an outlandish hypothesis might have offended the "learned" and uppity Moorehead?

The moment when Moorehead's fortunes were reversed occurred somewhere between the time the bones of the horned giants were stolen and the time he met Robert S. Peabody, the rich artifact collector, in Philadelphia.  As mentioned earlier, the bones were sent to Philadelphia after the Sayre excavation, to a museum which does not appear to have existed.  Coincidence?

So, Where Are The Bones?


Journal of the Bizarre has discovered  the answer!  Click HERE
giants Nephilim Pennsylvania