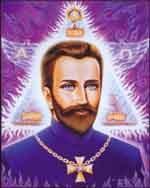 Depiction of The Count St. Germain, from a painting by Marie Klement

The Count of St. Germain has been a shadowy figure throughout history, and while few credible accounts of his life exist, he has been described as everything from a charlatan to an occult figure revered by Theosophists and mysticists, who refer to St. Germain as Master Rakoczi.

Other accounts from the period describe St. Germain as being everything from an alchemist and prophet, to an immortal spiritual being.  Some even believed him to be the mythical "Wandering Jew", who ridiculed Jesus on the way to the crucifixion and was cursed to roam the earth until the Second Coming.  Still others, skeptical of St. Germain's abilities, have referred to him as a master of quackery.

Even though his life is shrouded in mystery, a surprising amount of biographies have been written about Count of St. Germain.  Not surprisingly, however, is the fact that every biographer's account of St. Germain's life varies greatly from the next.  In all probability, the man known as Count St. Germain was most likely a PT Barnum-esque figure who projected a larger-than-life persona while being a master of manipulation.
St. Germain has thousands of followers and "disciples" to this day, thanks in part to the teachings of Madame Blavatsky, founder of the Theosophical Society, who asserted that in previous incarnations, St. Germain has been everyone from Francis Bacon and Christopher Columbus to Merlin, Plato, and even the ruler of a 70,000 year old Saharan civilization.  These disciples continue to persist, even in spite of Blavatsky's exposure as a fraud by many researchers, including Richard Hodgson in the 19th century and author Paul Zweig in the 1980s.

The man known as Count of St. Germain, whether immortal in real life or not, has attained a certain type of immortality in the form of a fringe culture icon.  St. Germain has been portrayed on the silver screen, described in literature and music, and has even recently made a few appearances in comic books and video games.
Count of St. Germain occult Strange History