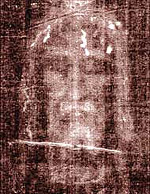 Researchers from Italy's National Agency for New Technologies, Energy and Sustainable Development recently examined the Shroud of Turin and concluded that the iconic image could not have been created by artists, and could only have been produced by ultra-violet lasers, a technology which didn't exist until the mid 20th century.

The team's research confirms the outcome of tests conducted by a group of 31 American scientists from STURP (Shroud of Turin Research Project) between 1978 and 1981.  STURP conducted 120 hours of ultra-violet and X-ray tests on the shroud.

Read the full story from the UK newspaper, The Telegraph, here.
religion Shroud of Turin