The Transgendered Warriors of the Ojibwe 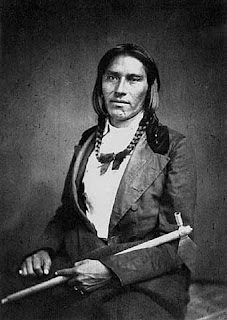 The Ojibwe share a fascinating system of beliefs.  One such belief is that the two genders are not male and female, but animate and inanimate.  This allowed the Ojibwe to develop a complex society in which "traditional" gender roles were not important.  Members of the tribe contributed to their communities and families in whichever way they felt was best.  They were the career moms and stay-at-home dads centuries before these terms became popular.  In fact, many Ojibwe warriors were transgendered.  Known as egwakweg, these transsexuals were honored and revered because they were "two-spirited", or niizh manidoowag.  It boggles the mind to think that these so-called "primitive" people were so many centuries ahead of their time, because even in the 21st century most "civilized" societies have yet to come to terms with transgender issues.

While some people may smirk at the thought of transgendered warriors, history shows that the Ojibwe were skilled tacticians when it came to art of war.  In 1745, armed with British guns, the Ojibwe defeated the Sioux and drove them out of their southern territories to the Dakotas.  They defeated the Lakota and Meskwaki (Fox), driving the Fox out of northern Wisconsin.  Allied with the French during the Seven Years' War, the Ojibwe fought against the powerful Iroquois Confederacy and the British.  They lost, of course, but the Ojibwe didn't give a hoot about adversity or the odds stacked against them.  They fought against the United States during the War of 1812, siding with the British.  Although historians conclude that the War of 1812 ended in a draw, it could have been a decisive American victory if not for the Ojibwe, who were determined to prevent American settlers from stealing their territorial lands.

The most well-known of these transgendered warriors was Ozaawindib, whom the Europeans called "Yellow Head".  John Tanner, an interpreter who lived among the Native Americans for thirty years, was raised by the Ojibwe in the late 18th century.  In his 1830 book, Tanner describes Ozaawindib: "This man was one of those who make themselves women, and are called women by the Indians."  Tanner also recalled that he was once the center of Ozaawindib's affections.  The warrior, who already had several husbands (polygamy was a common practice among certain tribes), made numerous advances toward Tanner.  However, the Ojibwe egwakweg  lost interest in Tanner when he became the third wife of Chief Wenji-Dotaagan.

History records Ozaawindib as being a courageous warrior.  His position within the tribe was that of Makandwewininiwag, known as a "pillager".  These Ojibwe pillagers were much like the modern-era Marine Corps; the first to arrive on the scene of battle.  The pillagers served as an advance guard, leading the invasion of Dakota territory.  Today, the legacy of this transgendered warrior can be seen in place names around Minnesota.  Lake Itasca's Yellow Head Point was named in his honor.
Native Americans Ojibwe