A Message From Beyond the Grave? 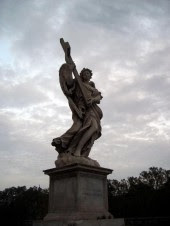 Many of us may remember the classic episode of The Twilight Zone from 1960, "A Most Unusual Camera", in which three bumbling crooks get hold of a magical camera which takes pictures of the future.  Recently, in Wichita, a boy named Addison Logan purchased an old camera at a yard sale which may be a real-life "magical" camera- or at least a camera worthy of mention in the Journal of the Bizarre.

According to a story which appeared on May 25 of the Wichita Eagle, Addison Logan, 13, had decided to accompany his grandmother, who was driving around Wichita in search of yard sales.  Although Addison admits to liking yard sales, he probably would not have accompanied his grandmother if not for the fact that he had recently broken his arm in a dirt bike accident.

After stopping at three yard sales, the 13-year old boy spotted an item which had caught his attention, and for one dollar Addison bought himself an old Polaroid camera.

Once at his grandmother's house, Addison tinkered with the obsolete camera, and when he removed the cartridge he noticed that it held one photograph which appeared to have been taken around 1978 or 1979.  Addison showed the picture to his grandmother, who was quite surprised- or perhaps shocked would be the appropriate word- because the picture from inside the old Polaroid was of her son Scott, who had died in a car accident over two decades earlier.

Could this be a sign from beyond the grave, or just some extremely bizarre coincidence?

While skeptics may cling to the latter, the Logan family isn't convinced.  Adding to the mystery, the family which was having the yard sale was a family unknown to the Logans; how the Polaroid ended up in their possession is anyone's guess.

Scott Logan was a 28 year old single dad, who eked out a living selling vacuum cleaners door to door at the time of his death.  He had been driving on I-70 on business when he fell asleep at the wheel. The car flipped, Scott was ejected, and the immediate cause of death was attributed to a broken neck.

Oddly, seven years prior to this accident, the Logan family endured an eerily similar tragedy.  Scott Logan's older brother, Brian, who was nineteen at the time, had also been killed in a car accident.  That vehicle also flipped and Brian was ejected.  He, too, died from a broken neck.


angels Beyond the Grave Strange News