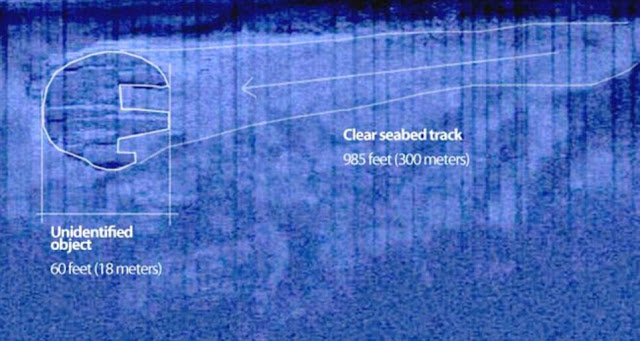 Earlier today, the U.K.'s Mail Online reported on the alleged find made by divers at the bottom of the Baltic Sea.  The supposedly metallic disc-shaped object, initially discovered by sonar in May of last year, is curved at the sides and is surrounded by a strange rock formation which researchers have been unable to explain.  The mysterious rocks which surround the object are said to be covered in some type of soot, which researchers have also been unable to explain.  The Swedish team, Ocean X, which is investigating the object has released photographs showing a 985-foot track which leads to the sunken object, leading many people to believe that the object crashed into the sea and then skidded to its current location.  The anomalous object currently sits 285 feet below the waters of the Gulf of Botnia.

However, there is another reason why this discovery is of particular interest to UFO researchers.  According to the Ocean X team, electronic equipment mysteriously stops working when they approach within 200 meters of the underwater object.  "Anything electric out there... and the satellite phone as well... stopped working when we were above the object," explains professional diver Stefan Hogerborn, who is part of the Ocean X team.  The investigative team has recently created a submarine which they hope will appeal to tourists who are willing to pay to take a trip down below the Baltic Sea in order to see the strange object for themselves (see below photo). 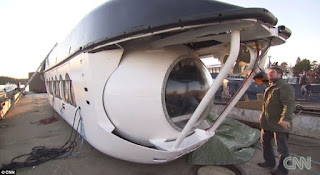 Here's what we think. 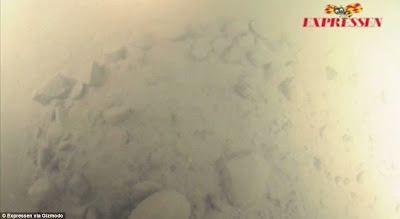 In fact, it would be impossible to take sonar photographs of the object, since the object is located at a depth of 285 feet, which is only 86.64 meters.  While sonar imaging depends on sound waves, which aren't electronic of course, the sonar camera itself is an electronic device.  In order for sonar imaging to work, the boat would have to be roughly 656 feet above the object.  Stefan Hogerborn also stated that satellite equipment also malfunctions in the vicinity of the underwater object.  If so, how are the researchers even able to obtain GPS coordinates necessary to pinpoint the location?

And what of these "submarine rides" offered by the team?  Obviously, Ocean X seems to think that they can cash in on their discovery.  Since submarines aren't powered by gasoline engines, we can assume that the sub in question relies on electricity in order to function properly, and if all electronic equipment stops working within 200 meters of the object, the tourists on board aren't likely to get anywhere close to the object, since doing so could lead to potentially fatal consequences.  Since the submarine would only be able to get to within 656 feet of the "UFO" before experiencing an electronic malfunction, and the object is only 285 feet underwater, what purpose could be served by taking an expensive submarine ride?

Sounds like a publicity stunt to us... and a poorly-constructed one at that.