Has John the Baptist Been Found in Bulgaria? JOTB Doesn't Think So. 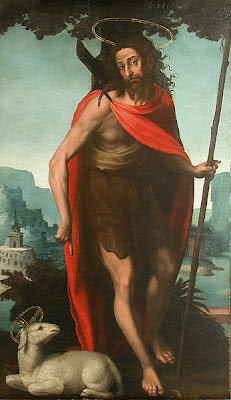 Just days after it had been reported that Bulgarian researchers have unearthed the corpses of "vampires" (see our previous post), Discovery News reports that knuckle bone and other remains found on an island in Bulgaria may have belonged to John the Baptist.

The bones, which were discovered inside of a marble tomb on the island of Sveti Ivan two years ago, have been the focus of exhaustive research by Oxford University.  The bone from the right knuckle has been dated to the first century, which coincides with the saint's period of preaching.  Recently, scientists from the University of Copenhagen analyzed the DNA of the bone fragments and concluded that they belonged to a male of Middle Eastern descent.

While these findings cannot conclusively confirm the identity of the famously-beheaded saint, the relics were originally discovered inside of a small box which had been inscribed in ancient Greek.  The inscriptions allude to John the Baptist, and also mention the date June 24, which is the day in which the church celebrates the saint's birth.

One Oxford researcher believes that the monastery on Sveti Ivan may have obtained the saint's bones sometime within the 5th or 6th centuries. (read the full story here)

However, by studying a tiny bit of history and using some common sense, the theory that the Bulgarian relics may be those of Saint John can easily be refuted, as we explain below.

While it may be tempting to jump to conclusions, one must bear in mind that dozens of churches claim to possess relics from John the Baptist.  His right hand alone is claimed to be in the possession of the Cetinje monastery in Montenegro, Topkapi Palace in Istanbul, and a monastic community in Macedonia.

How can researchers be sure that they have found the real thing?

Most scholars have concluded that John the Baptist was buried in Samaria near the village of Sebastia, where his relics have been revered by Christians since the 4th century, until the year 362, when Roman Emperor Julian (who was determined to restore Roman paganism) ordered the bones to be burned.  A portion of the bones were salvaged and taken to Jerusalem and Alexandria.

When bone is exposed to heat, a number of significant changes occur.  These include a change in the crystalline structure of the bone, a change in the microscopic morphology of the bone surface, carbonate loss, and mineral sintering.  The changes happen at a heat as low as 212 degrees Fahrenheit.  Chemical reactions are accelerated two-fold for each additional 10 degree Celcius rise in temperature (Von Endt and Ortner, 1984).

This means that even if the bones had escaped incineration, they would have been exposed to temperatures high enough to produce significant changes.  Thin layers of carbon are deposited onto the bone when the heat reaches 212 degrees (F), with full recystallization of hydroxyapatite occurring around 1292 degrees.

To put this into perspective, the typical flame from a cigarette lighter measures around 950 degrees Fahrenheit, while a typical cup of fresh coffee registers at around 140 degrees.  Even a standard 40-watt lightbulb can attain temperatures of 252 degrees- more than enough heat to produce changes in human bone.

Since these changes are obvious to even the most amateur scientific eye, I find it hard to believe that scientists from such illustrious backgrounds as Oxford University and the University of Copenhagen would ignore such a simple observation.  Scientists can tell by the DNA that the bones belonged to a male of Middle Eastern descent, but they could not oberve the tell-tale signs of heat exposure?

In other words, if there are no signs of heat exposure on the bones, they do not belong to John the Baptist.