Remembering the ill-fated voyage of the Aerowagon 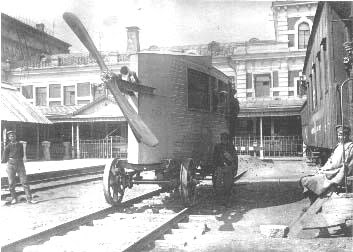 From 1917 to 1922, the Bolshevik-led Red Army battled the anti-Communist White Army during the Russian Civil War.  By the end of 1919 the Bolsheviks had taken the cities of Omsk and Kiev, and had successfully repelled the White Russian siege of Petrograd.  However, the Bolshevik's momentum would be short-lived as the White Army, after retreating across the Baikal, regrouped and joined forces with Gigory Semyonov's Transbaikal Cossacks.  As the Red Army's losses began to mount, especially in Poland, the Bolsheviks attempted to gain a competitive advantage by embracing new technologies, sometimes with disastrous results.  Such is the sad tale of young inventor Valerian Abakovsky and his Aerowagon.

Abakovsky was a Latvian-born inventor who earned his living as a chauffeur for Cheka, the state security organization created by Lenin.  His position granted him access to many high-ranking Soviets and, although details are scarce, Abakovsky most likely used his influence within the Cheka to interest the Soviets in his invention, which came to be known as the Aerowagon.


Essentially a high-speed train car powered by an aircraft engine, the Aerowagon was intended to transport the Communist elite. With its giant front-facing propeller, Abakovsy's Aerowagon resembled nothing the world had ever before seen.  Although just twenty-five years old, Abakovsky possessed the type of radical forward-thinking which the Bolsheviks admired.  Unfortunately, Abakovsky's inexperience showed through in the Aerowagon's design; by all accounts the vehicle was loud, unstable, and frightening.

Nonetheless, the Aerowagon was tested by a group of several top-ranking communists led by Fyodor Sergeyev.  Sergeyev, a close friend of Josef Stalin, had quickly climbed the communist ladder, first as an outspoken political agitator in college and then as a member of the 5th congress of Russian Social Democratic Labour Party.  By the age of twenty-seven Sergeyev had been arrested and exiled to Siberia before escaping to Australia in 1910.  In 1917, he returned to Russia and became a leading member of the Bolshevik movement.  It was Sergeyev who invited a group of foreign communist sympathizers aboard the Aerowagon for its test run and maiden voyage on July 24, 1921.  Those in attendance included Oskar Heilbrich, Otto Strupat, John Freeman, John William Hewlett, Sergeyev, and the young inventor, Valerian Abakovsky.

The Aerowagon ran successfully during the first leg its test run, which took place near the industrial city of Tula, 121 miles south of Moscow.  However, on the return trip from Tula to Moscow, the Aerowagon derailed at a high rate of speed, killing everyone on board.  All six passengers were buried in the Kremlin Wall Necropolis, marking the last mass burial to take place there.  Today, Abakovsky and his Aerowagon are mere footnotes in history, but the young Latvian-born communist did obtain one unusual place in history- as one of a handful of inventors who were killed by their own inventions.