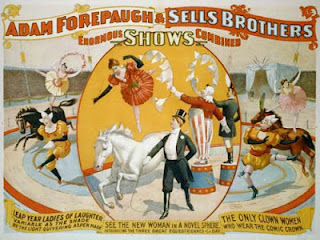 When one thinks of dangerous professions during the 19th and 20th centuries, we tend to think of those who worked in the mining, railroad, and lumber industries.  The circus profession, however, was just as dangerous as crawling through coal mines or felling timber.  Hundreds of acrobats and performers have met their demise beneath the brightly-colored big top, and while every death is unfortunate, some are more memorable than others.  Here are a few circus-related deaths which can be described only as bizarre.

Suicide of a Clown

The image of the sad clown is poignant because clowns exist to bring smiles to people's faces.  Perhaps the only thing sadder than a sad clown is when a clown decides to take his own life, which is exactly what Charles Rench did in 1908.  Rench was a renowned clown with W.W. Cole, P.T. Barnum, and the Irwin Bros.  He was so successful that in 1886, at the age of 16, the Barnum circus presented him with "a magnificent gold-headed cane" as part of a special ceremony in front of a packed house in his hometown of Columbus.  Unfortunately, Rench sustained serious injuries after a fall during a performance and this career-ending mishap led to the clown's ultimate demise; he decided to take his life by setting himself on fire at the home he shared with his sister at 76 South Front St. in Columbus:

CLOWN BURNS HIMSELF TO DEATH / Columbus, Ohio, June 25. - Charles Rench, a well known circus clown, who had been in ill health, piled papers on the floor of his room here yesterday, applied a match, and then lay on the flaming pyre. His sister, with whom he lived, attempted to drag Rench to safety, but he resisted, and she was badly burned before she abandoned her efforts at rescue. He was burned to death. (New-York Tribune, 1908)

A story which appeared in the Melbourne Herald Sun on July 16th, 1999 describes what may be the most unusual death not only in circus history, but perhaps in all of history:

A dwarf nicknamed Od has died in a circus accident in northern Thailand. According to the Pattaya Mail, he "bounced sideways from a trampoline and was swallowed by a yawning hippopotamus which was waiting to appear in the next act. Vets on the scene said Hilda the Hippo had a gag reflex that automatically caused her to swallow." The vet said it was the first time the hefty vegetarian had ever eaten a circus performer. "Unfortunately, the 1,000-plus spectators continued to applaud widely until common-sense dictated that there had been a tragic mistake"


The Strongman Who Was Too Strong

Zishe Breitbart was a blacksmith from Poland who eventually became one of Europe's most famous strongmen, known for such feats as biting through iron chains, bending bars, and even breaking horseshoes in half with his bare hands.  In October of 1925, Breitbart died from complications from a stunt he performed while touring Germany.  Oddly, his death was not the result of a failed stunt, but as a result of a stunt that was a little too successful.

Using only his bare hands, Breitbart would drive a steel spike through 5 inches of solid oak.  During his final performance, Breitbart drove the spike through the wood with such ferosity that he ended up driving the spike into his knee.  He suffered blood poisoning and underwent nearly a dozen operations, which resulted in the amputation of both legs.  Unfortunately, the amputation was not enough to stave off the infection and he died in Berlin at the age of 42.

On March 22, 1872, a trapeze artist with the Backenstose Circus who performed under the name of Miss Rosa was shot and killed in Cincinnati by the circus ringmaster, a man named James C. Davis.  Newspaper reports claim that Davis and the trapeze artist were married, while other sources (such as circushistory.org) claim that Miss Rosa was also married to an acrobat named J.W. Whettony, who also performed on the Backenstose circuit.  Davis was later found not guilty of the murder, which was ruled accidental.  But was the death of Miss Rosa really an accident?  The world may never know.