Strange History: The Day a Dead Jockey Won at Belmont 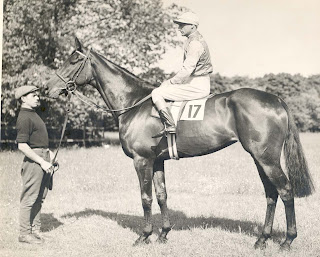 Since opening in 1905, New York's famed Belmont Park has been called one of the world's finest horse racing tracks.  As every sports fan knows, the Belmont Stakes constitutes the third leg of the Triple Crown.  Naturally, this track has seen its share of memorable finishes.  One such finish took place on June 4, 1923.  What made this race noteworthy, however, was the fact that it was won by a dead man.

On the home stretch, a horse named Sweet Kiss took the lead, spurred on by a jockey named Frank Hayes.  Hayes had never won a race before, and the spectators in attendance who noticed the slumped jockey on the thoroughbred's back thought the young rider was merely 'showboating', riding the horse one-handed, relaxed as a dog sleeping in front of a fireplace.

But when the horse crossed the finish line it became quite evident that Frank Hayes was more than just "relaxed"- the jockey dropped out of the saddle, lifeless.

It was later determined that Hayes had died of heart failure shortly after Sweet Kiss took the lead, and the New York Times speculated that the jockey's heart had given out as a result of severe training in order to make weight, coupled with the excitement of winning his first race.  Hayes, dressed in his colorful racing silks, was buried three days later.  In light of the incident, Belmont's Jockey Club waived all of the rules and thus made Hayes' win official.  This ruling makes Frank Hayes the only jockey to win a race while deceased.  In fact, it just may be the only time in sports history when a competition was won by a dead man.