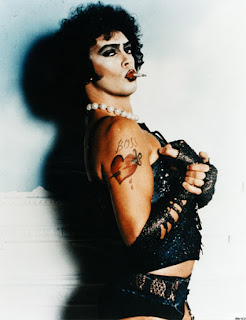 It's that time of year again, when the leaves begin to fall and children go trick-or-treating, and people all over the world grow nostalgic for the 1975 cult classic film, The Rocky Horror Picture Show.  The Halloween season is also the time of year for candy, and nothing satisfies our cinematic sweet tooth like the 1971 favorite, Willy Wonka and the Chocolate Factory.  These two beloved films have become autumnal favorites, but have you ever stopped to take notice how much these two films have in common?  We have!  Below you will find a list of similarities between the two movies, ranging from the painfully obvious to the downright obscure. 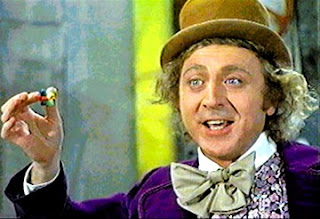 1. Both films have an eccentric main character.  Willy Wonka is a mad candymaker, while Dr. Frank-N-Furter is a mad scientist.

3. Both films feature plenty of singing and dancing.

5. In both films, there is a secret "inner sanctum" where creations are made.  Wonka's factory has the Inventing Room, where "secret" creations like the everlasting gobstopper are made.  Frank-N-Furter's castle has a laboratory, in which he creates Rocky Horror.

6. Alliteration can be found in the names of each movie's main character- Willy Wonka and Frank-N-Furter. 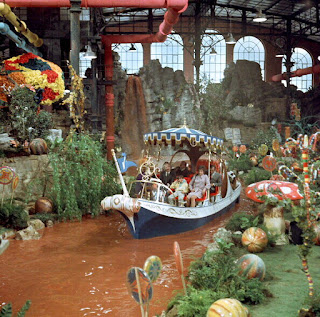 7. During the tunnel scene in WWATCF, the visitors take a boat ride on a vessel which Wonka refers to as the Wonkatania- an obvious allusion to the Lusitania, which was an ocean liner which sank.  During the floor show scene in RHPS, Dr. Frank-N-Furter is floating in a pool with a life saver bearing the words H.M.S. Titanic which, of course, is another famous ocean liner which sank.

8. The geographical settings of both films are left open to interpretation.

9. This one is pretty obscure.  Both films contain a reference to a real-life controversial figure.  In RHPS, there is a scene early in the movie in which Brad and Janet are driving in car during a storm.  If you pay close attention, you can hear Richard Nixon's resignation speech playing on the radio.  In WWATCF, there's a scene which takes place in Charlie's house, and a television newscaster is talking about one of the Golden Ticket winners who turned out to be a fraud.  The picture displayed on the TV screen is actually a photograph of Martin Borrman, one of Hitler's henchmen.

11. Both movies contain a character named after a color.  In WWATCF, there's Violet.  In RHPS, there's Magenta. 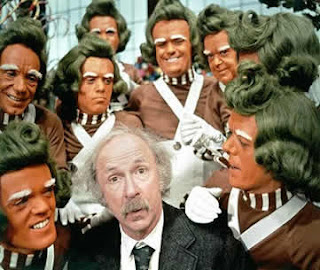 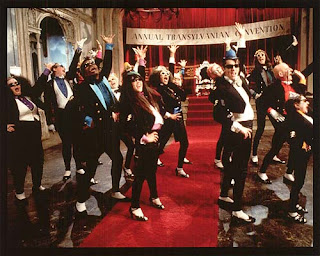 14. Both films were huge box office failures when first released.

16. Before entering the Inventing Room, Willy Wonka makes a speech in German.  In RHPS, Dr. Scott speaks with a German accent.

17. In both films, characters eventually give in to temptation.  In WWATCF, Charlie and Grandpa Joe steal fizzy lifting drinks.  In RHPS, Brad and Janet both commit adultery.

18. Both films feature a festive atmosphere.  Willy Wonka opens his chocolate factory to a brass band and dozens of cheering spectators.  Dr. Frank-N-Furter opens his castle for a Transylvanian Convention.

21. Science class is a part of both films.  In WWATCF, one of the scenes takes place in Charlie's science class.  In RHPS, Brad and Janet first met each other in science class.

22. Each films contains underlings with double identities.  In WWATCF, Wonka's assistant is Mr. Wilkinson, who pretends to be the evil Slugworth.  In RHPS, Riff Raff was Frank-N-Furter's servant, who eventually stages a coup with Magenta to kill Frank and return to Transylvania.

23. The main characters of both films are both quick with witty remarks:

Mr. Beauregard: What is this Wonka, some kind of funhouse?
Wonka: Why? Having fun?

Brad: What have you done with Janet?
Dr. Frank-N-Furter: Nothing. Why? Do you think I should?

24. Both films seem to present a cautionary tale about marriage.  In WWATCF, Henry is married to Henrietta, Joe is married to Josephine, George is married to Georgina, and all are bedridden in one bed.  This symbolism can be interpreted to suggest that marriage often robs people of their individuality.  In RHPS, Brad and Janet are newly-engaged and face a series of challenges which test their loyalty and faithfulness.

What does this all mean?  Is this some kind of conspiracy involving cross-dressers and chocolate?  Were Willy Wonka and Dr. Frank-N-Furter brothers separated at birth?  Probably not.  But it will give you something fun to talk about at your next Halloween party!