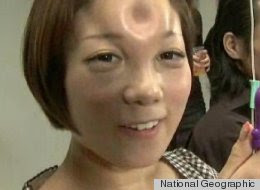 "Bagel Head" forehead injections, in which saline is inserted into the forehead in order to produce a donut-shaped protrusion, have become all the rage in Japan.  While this form of extreme body modification may sound bizarre to the Western world, this trend has been growing in popularity among the Japanese since 2009, when the "bagel head" form of self-expression was pioneered by an artist by the name of Keroppy.

Now, thanks to a recent episode of "National Geographic Taboo" which aired on September 27, American audiences are getting their first glimpse of the trend and, judging by the popularity of the term "Bagel Head" in Google searches in recent days, it just may be a matter of time until this form of body art sweeps across the U.S.

This leads us to wonder what's next in the world of body mods.  Perhaps elective amputations will be next the next form of extreme modification, as trend-conscious teens lop off fingers and toes in order to make a social statement.  Perhaps the next big thing will be antler implants, so we can strut around town looking like a moose.  Who can tell?

The good news, however, is that the bagel head forehead injection doesn't result in any permanent disfigurement- the effects are only temporary.  The effect lasts around sixteen hours, until the injected saline is absorbed by the body.