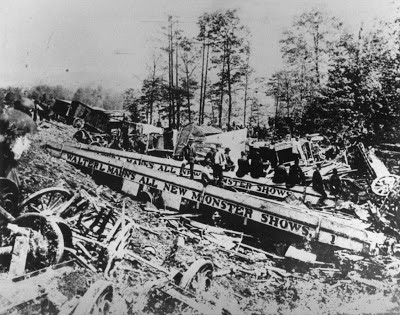 Skeptics who attempt to refute alleged Bigfoot sightings have offered countless explanations over the years; some more reasonable than others.  One explanation which deserves more attention is the possibility that many of these sightings can potentially be traced back to circus train derailments.

Dozens of wrecks involving circus trains took place during the late 19th and early 20th centuries, resulting in exotic animals turning up some strange places.  One such incident took place in 1893, in a heavily-forested region of central Pennsylvania shielded by the Bald Eagle and Nittany Mountains.  On Memorial Day, 1893, a tragic train wreck involving the Walter L. Main Circus occurred three miles north of the town of Tyrone.  Five people were killed, and scores of circus animals escaped, unable to be captured.

According to the June 2, 1893 story which appeared in the Democratic Watchman:

"Of the animals, all escaped from their cages. Early arrivals at the scene say that strange animals were to be met everywhere making for the woods"

One of the best-written accounts of the "Great Train Wreck of 1893" appears on Norman Houser's blog, "The Pennsylvania Rambler" , in which the author writes:

"Of the strange claims and sightings after the wreck, one of the strangest came from a couple of travelers on Warriors Ridge near Alexandria. They claimed as they were crossing the ridge between Alexandria and Huntingdon, they spotted a kangaroo bounding away."

Other accounts of the incident describe exotic animals, most often kangaroos and monkeys, turning up for years after the wreck.  One such account stated that kangaroos were still in the nearby woods at least five years later.  It may seem unlikely that feral kangaroos roaming the Pennsylvania woods thousands of miles away from Australia would be able to reproduce and adapt to the change in climate but, interestingly, several reports of cryptid sightings in the area contain descriptions which may indicate that the "wild kangaroos" were able to do just that.

The PA Bigfoot Society maintains an impressive and detailed database of sightings on its website, and while the majority of the sightings include the all-too-familiar description of a large ape-like creature which we have come to associate with Bigfoot, some of the sightings which have taken place in Centre, Blair, Huntingdon, Cambria, and Clearfield counties (all within 25 miles of Tyrone) contain descriptions of more unusual creatures, for instance:

July 1991: Centre County: A woman driving along route 192 observed a reddish colored creature watching her from a tree. She described the creature as being 3 ½ to 4 foot tall, weighing about 130 lbs covered in reddish brown hair like a fox. The two observed one another for several minutes before the creature walked up a path and disappeared. (PA Bigfoot Society)

January 1970: Centre County: A female witness reported seeing an ape-like creature leaning against a post along Rte 45. When the sighting was investigated, footprints 21 inches long and with 3 toes were found in the snow. (PA Bigfoot Society)

February, 2004 Cambria County: While driving on route 56, a woman claims she struck a 2 ½ foot tall hair covered creature with the body of a bear and face of a monkey. After turning around to return to the area, upon arriving, the creature was gone. (PA Bigfoot Society)

1992 Between Altoona and Galitzin (Cambria County): A woman driving on route 22 after dark, witnesses a creature run across route 22 in front of her car, jump a guardrail and drop down an embankment. The creature was a smaller creature standing about 5 foot tall covered in dark colored hair.

The last description certainly sounds more like a kangaroo sighting than a Bigfoot sighting, since there doesn't appear to be too many accounts of small Bigfoot-like creatures hopping and jumping over things.  The 1970 sighting from Centre County also seems to be more in line with a kangaroo.  Although kangaroos have 4 toes, that's still one less toe than Bigfoot is rumored to have.  Also, one of the toes is very small and often does not leave a print, as evidenced by the picture below. 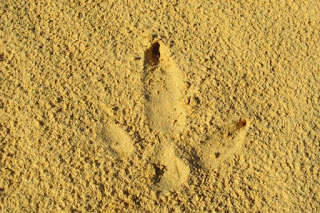 The other sightings may indicate a smaller species of kangaroo, such as the tree-kangaroo, which (as its name implies) is an arboreal creature.  This would explain the small, strange creatures which have been sighted perched in trees.  Most species of the tree-kangaroo are found in mountainous areas, so they stand a good chance of surviving in the mountains of Pennsylvania.  The newspaper account from 1893 also describes an odd animal referred to as an Australian "gravedigger":

Of them, the birds, monkeys, two "Gravediggers" from Australia, a black panther and a silver tiger from Asia all got clear away but all have been recaptured or killed except the black tiger which is still at large.

The gravedigger is a cryptid which has been spotted all over the United States.  The gravedigger also bears a strong resemblance to the tree-kangaroo.  Since the Walter L. Main Circus specialized in "monster shows"- displaying odd and unusual animals- it's very possible that the gravedigger cryptids seen throughout America over the past 100 years are, in reality, descendants of Australian tree-kangaroos which had escaped during circus train wrecks.

While not every Bigfoot sighting can be explained or debunked, there are enough coincidences, at least in Central Pennsylvania, to indicate that a link may very well may exist between circus train wrecks and cryptid sightings.