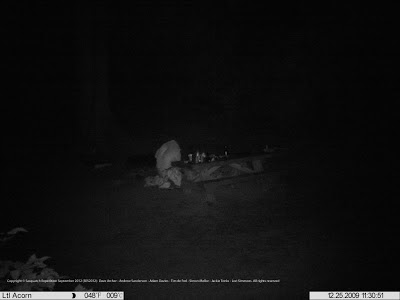 The cryptozoology world has been abuzz lately, thanks to photos of an "unknown creature" which was captured on a trail cam by members of Extreme Expeditions Ltd. during a recent two week expedition in Washington State's North Cascades National Park.  On September 4 of this year, the team's trailcam captured what appears to be a large figure crouching by the remnants of a campfire while the team of researchers slumbered nearby.

A film clip and photos of the creature (which can be viewed on the Extreme Expeditions Ltd. website) were analyzed by Jeff Meldrum, Professor of Anatomy and Anthropology at Idaho State University and Ian Redmond, a field biologist.  While Meldrum and Redmond could not explain the creature, they also could not conclusively rule the footage as fake.  On October 21, Extreme Expeditions published the independent analyses conducted by crytozoologists Dale A. Drinnon and Damian Bravo, which speculates that the "mystery creature" possessed a shoulder width of 4 feet, and may have stood between 8 and 9 feet in height.

To skeptics, it appears that one of the biggest question marks is the fact that the timestamp on the footage is wrong.  Although the expedition team's members state that the creature was filmed on September 4 of this year, the timestamp bears the date 12/25/2009, as well as the wrong time of day.  On the Extreme Expeditions blog, an explanation for the discrepancy is provided:

We feel it is very important to advise that although the time/date stamp is incorrect on all images (showing 25/12/2009 and incorrect times) we regularly reset the settings on trailcams for both the date and the number of images/film length to shoot – but more often than not, it reset itself to its default settings and dates – we have no idea why

This discrepancy may raise a few eyebrows among skeptics, who may deem the footage to be the work of hoaxers.  Isn't it "convenient" that the camera's timestamp malfunctioned precisely on the night when the images were captured?  What are the odds of that!  And why would the timestamp reset itself to the rather arbitrary date of Christmas Day in 2009?

The research team at Journal of the Bizarre decided to look into this aspect of the footage, in order to determine if Extreme Expeditions had provided readers with a satisfactory explanation of the timestamp discrepancy.  In our short history, our unbiased researchers have been the first to debunk several popular claims (such as the Baltic Sea UFO, the long-standing and oft-written about myth of the Horned Giants of Pennsylvania, the claim that the bones of John the Baptist have been located in Bulgaria, and the recent Kentucky Bigfoot Sighting), and we have also offered plausible explanations for cattle mutilations, along with other Pennsylvania Bigfoot sightings and cryptid creatures (such as the giant walking crayfish).

When it comes to the timestamp discrepancy, we first focused our attention of the bottom left of the pictures, which display the temperature.  According to Extreme Expeditions, the mystery creature appeared at approximately 2:30am (rather than 11:30, as indicated by the timestamp).  The photo indicates that the temperature at the time was 48 degrees.  According to the National Weather Service, which maintains temperature records from 20 observation stations in the region, the temperature was indeed within that range on that particular evening, with low night-time temperatures averaging 47.3 degrees.

Conversely, if the camera was functioning properly and the images were recorded on 12/25/09, the temperature displayed would have been considerably lower.  The Farmer's Almanac indicates that the temperature on 12/25/09 at Sedro Woolley (near North Cascades National Park) was never higher than 41 degrees on that particular day, with an average temperature of 33.1 degrees, and a low temperature of 30.2.  Our conclusion is that, yes, the footage in question was captured during the early hours of September 4, 2012, as stated by Extreme Expeditions Ltd.

Next, we focused on the "default" date of 2009.  The bottom left of the trailcam capture indicates that the camera was manufactured by Ltl Acorn Outdoors, a Wisconsin-based company which began as a small archery shop.  Today, Ltl Acorn produces a wide variety of hunting and outdoors gear, ranging from footwear and clothing to bow cases.  Ltl Acorn began manufacturing trail cameras in 2009- which explains the camera's default setting.  Based on numerous user reviews (and there are thousands of Ltl Acorn trailcam reviews online), the problem experienced by Extreme Expeditions is not unusual, and frequent happens in some of Ltl Acorn's earliest (circa 2009) models, such as the 5210A.  Extreme Expeditions Ltd. does not specify the model of trailcam which captured the mystery creature, but we wouldn't be surprised if it was a Ltl Acorn 5210A.


In conclusion, while we cannot confirm or deny that the North Cascades "mystery creature" is the mythical Bigfoot, Journal of the Bizarre believes that Extreme Expeditions' explanation of the malfunctioning timestamp is accurate and truthful, and that the footage was captured on September 4, 2012 as indicated by the team, and not on December 25, 2009, as indicated by the timestamp.