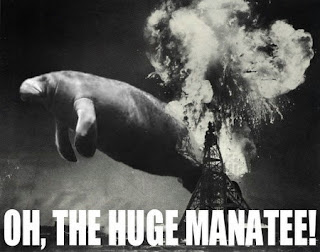 Two months ago, a photo circulated showing a woman riding on the back of a manatee at Fort DeSoto Park, which attracted the attention of Sheriff Bob Gualtieri of Pinellas County.  The sheriff held a news conference on Oct. 2, pleading with the public to help identify the woman in the picture.

This week, the heinous cold-blooded criminal has finally been captured!

Ana Gloria Garcia Gutierrez, of St. Petersburg, was taken into custody without incident when police arrived at her place of employment, dragging the 53-year-old Sears employee to jail, where the nefarious outlaw was later released on $1,500 bail. 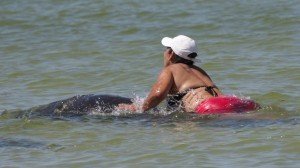 Gutierrez, who admitted having committed this most egregious offense, stated that she did not know that it was illegal to use a sea cow as a boogie board.  However, Florida's Manatee Sanctuary Act states: “It is unlawful for any person at any time, by any means, or in any manner intentionally or negligently to annoy, molest, harass, or disturb or attempt to molest, harass, or disturb any manatee.”

Gutierrez may face up to six months in prison for the misdemeanor, and Sheriff Bob Gualtieri is expected to receive a special medal from the governor for his heroic actions in bringing this dangerous miscreant to justice.

Although the world now knows the identity of the woman in the picture, the manatee has still not been identified.