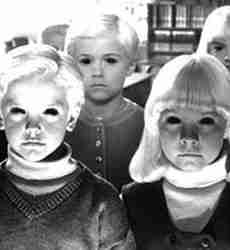 Much has been written on the myth of the "black-eyed children"- a favorite topic among paranormal researchers and ghost story aficionados.  According to legend, these creepy-looking kiddies with large coal-colored eyes pop up at night, tapping on windows and scaring the bejeezus out of the people who encounter them.

In most accounts, these black-eyed children seek permission to enter your home or car, asking to use a phone or for some other favor.  In practically every case, these mysterious individuals appear at night.  Witnesses claim that one look into their black eyes invokes a strong feeling of horror, and sightings of these creepy kiddies have been reported in virtually every corner of the globe.

Some paranormal researchers, such as David Weatherly (who has recently published a book on this very topic), believe that "black-eyed children" are demonic in origin.  Others believe that these children are alien in origin.  Still others insist that they are inter-dimensional beings, trapped on the wrong plane of existence.

Even skeptics have a difficult time finding a reasonable explanation.  The most popular skeptical viewpoint maintains that these children are part of some goofy cult, whose members use black-colored contact lenses to scare the daylights out of unsuspecting adults.  While practical jokes may account for several sightings, this theory doesn't seem to explain why some of the "black-eyed children" appear to be no older than five or six years old.

We, at Journal of the Bizarre, believe that there is a perfectly reasonable explanation behind the mystery of the "black-eyed children".  In fact, the explanation is so ludicrously simple that it's amazing how this "myth" continues to spread- befuddling scores of so-called paranormal "researchers" along the way.

The explanation is a perfectly-normal pupillary response known as mydriasis.

In dark conditions, the human pupil (the black part of the eye) dilates, thanks to the iris dilator muscle.  This expansion of the pupil allows more light to enter the eye- an evolutionary adaptation which allowed our cavemen forebears to see better in the dark.  Quite simply, the darker the environment, the more the pupil expands.


This explains why 99.9% of sightings occur at night and, more particularly, on extremely dark moonless nights, most often in rural areas.  If you want to see this perfectly natural pupillary response in action, all you have to do is sit in a completely dark room for an hour or two, stand in front of a mirror, and then quickly look at your eyes in a mirror after you flick on the lights.  You might be surprised to discover that you are one of the "black-eyed children"!

All of these questions have simple answers as well.

If you were a child who has been outside in a pitch-black rural area for an hour or two, wouldn't you attempt to use someone's telephone if you were lost?  And if you were a child who knocked on the window of a car or a house at night and was greeted by a blood-curdling shriek from a person who believes they just saw a demon, we're pretty sure you'd disappear in a hurry.

But why are these entities always children? The reason for this is that, as we age, our pupil's reaction to light and darkness slows down.  The pupils of a  40-year-old man will not expand or contract as much as a child's, and an adult would have to spend a much, much longer period of time in total darkness for mydriasis to occur.

Other cases of "black-eyed children"-especially when the mysterious beings are teenagers- may be linked to drug use, since mydriasis is a side effect of numerous prescription and recreational drugs.

Mydriasis is a common side effect of drugs which increase serotonin levels.  Not surprisingly, these drugs are popular among teenagers.  They include LSD, DMT (dimethyltryptamine), mescaline, and psilocybin (the "magic" in magic mushrooms).

Ecstasy (MDMA) is also known to cause mydriasis, along with cocaine, amphetamines, fenfluramine, "bath salts", several types of antidepressants, and even caffeine. Atropine and scopolamine, both found in jimson weed, can also cause mydriasis.

Doesn't it seem suspicious that the increase in reported sightings of "black-eyed children" goes hand-in-hand with the increase in popularity of drugs like Ecstasy and "bath salts"?

In other words, if a black-eyed teenager seeks to enter your home at night and is acting rather strange, you probably don't have an inter-dimensional space alien on your hands- just a punk who's hopped up on Ecstasy and Red Bull.  But, hey, don't take our word for it.  If you'd rather plunk down 25 bucks on a book written by a so-called "researcher" who claims that black-eyed children are demons, then hooray for you.  If that's the case, perhaps you'd like to buy a ticket to see the embalmed Sasquatch we have in our garage.