on January 30, 2013
Does the Bible Predict the Newtown Massacre? 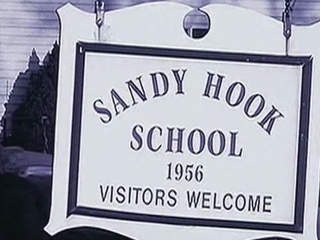 Since the time the Bible was written, it has been used by millions of people to search for clues that may foretell a future event.  Some scholars even point to the existence of a "Bible code", which they claim predicted horrendous events ranging from the Holocaust to 9/11.  But does the Bible have anything to say about the December 14 massacre in Newtown, Connecticut?

To resolve our own curiosity, we compiled every fourteenth verse of every chapter twelve in the Old Testament (in order to reflect the date of the shooting, 12/14) and were surprised to discover some extremely weird coincidences.

Did we say weird?  We mean downright creepy.  Not only does every single appearance of 12:14 in Scripture seem to reflect an aspect of the Sandy Hook shooting, it seems to do so in virtually the same chronological order as the details of the event that were supplied to the public by the media.


Genesis 12:14- "So it was, when Abram came into Egypt, that the Egyptians saw the woman, and she was very beautiful."

Could this beautiful woman be Victoria Soto, one of the first faces of Sandy Hook that was shown by media outlets?  Abram could be interpreted as Adam Lanza, Egypt could refer to the school or town, and the Egyptians could refer to either the media, victims, or first responders.


Exodus 12:14-  "So this day shall be to you a memorial, and you shall keep it as a feast to the Lord throughout your generations"

The date of Dec.14, 2012 will no doubt be memorialized for generations to come, but that's not the most intriguing coincidence about this passage.  This chapter of Exodus refers to Passover.  Adam Lanza was born on April 22, 1992- right in the middle of Passover.

Numbers 12:14- "...if her father had but spit in her face, would she not be shamed seven days?  Let her be shut out of the camp seven days, and afterward she may be received again"

As details about Nancy Lanza began to emerge, it was reported that she had learned a dark family secret- that she had a sister who was kept hidden by her father.  On her Facebook profile, Nancy said that her half-sister Cheryl was born in Cincinnati, but that her parents appeared to have disowned the child.  Shortly before her death, Nancy expressed a desire to meet her long lost sister.

Deuteronomy 12:14- "But in the place which the Lord chooses, in one of your tribes, there you shall offer your burnt offerings, and there you shall do all that I command you."

Not long after the shooting, conspiracy theories began to abound.  This passage seems to fit the "hoax" theory proposed by some of them.  If Sandy Hook was a hoax, the government (Lord) would have chosen the location.  Connecticut would be the chosen tribe (state), the burnt offerings would be the victims, and the alleged "crisis actors" would have been taking their commands from the government.

Judges 12:14- "He had forty sons and thirty grandsons, who rode on seventy young donkeys."

This passage refers to Abdon, a judge of Israel.  However, it can be translated to fit the description of the responders, since the sons and grandsons of a judge can refer to law enforcement officials.  The News Times reported: The area was soon swarming with local and state police, as well as agents from the FBI, the Bureau of Alcohol, Tobacco, Firearms and Explosives and other agencies.  The same article also states that many of these agents arrived via bus- a large cumbersome mode of conveyance, much like a donkey:

"We need buses here, ASAP. Call Danbury if you have to," an unidentified voice on the line says. "Get me the bus up here right away. Send the ambulance up, right up to me."

1 Samuel 12:14- "If you fear the Lord and serve Him and obey His voice, and do not rebel against the commandments of the Lord, then both you and the king who reigns over you will continue following the Lord your God."

The suspected motives behind Lanza's actions have been debated since the very beginning, but it wasn't until just recently that it was reported that Nancy Lanza wanted to have Adam committed to a psychiatric facility.  This would have added considerably to his first "yoke"- the divorce between Nancy and Peter.

2 Kings 12:14- "But they gave that to the workmen, and they repaired the house of the Lord with it."

In the Bible, this refers to the donations made to rebuild the temple.  Tens of millions of dollars have been donated to Sandy Hook, to "rebuild" the community, to rename a school after one of the slain teachers, and even to pay overtime to the law enforcement officials.  A story detailing the amount of money donated thus far, and how it was being spent, didn't appear until after the report that Nancy Lanza wanted to have her son committed, thus in keeping with the Biblical sequence.

1 Chronicles 12:14- "There were from the sons of Gad captains of the army; the least was over a hundred, and the greatest was over a thousand."

By this time, the conspiracy movement began picking up steam.  If there was a vast conspiracy, the "army" (media, politicians, actors, law enforcement, etc.) would number in the hundreds or perhaps thousands.

In this passage, Jonathan and Joseph are high priests who are heads of their father's respective houses in "the days of Joiakim"- the equivalent of a modern-day diocesan spokesperson.  The spokesman for the Diocese of New York (which oversaw 5 of the Sandy Hook funerals) is named Joseph Zwilling.  The rabbi who was the keynote speaker at President Obama's Inaugural Prayer Breakfast was named Jonathan Cahn.  Cahn is the president of Hope of the World Ministries, and has spoken at great length about Sandy Hook.  Cahn is also the author of "The Harbingers", a book which claims that the 9/11 attacks were "payback" from God.

Fears over the federal government's tampering with the Second Amendment came to a head after Obama's inauguration.  In this Bible passage, Job, the long-suffering victim, might represent the millions of Americans who believe that, if the Second Amendment is taken away, America will suffer irreparable damage.

The next four verses seem to provide stern warnings to those either behind the Sandy Hook conspiracy or to those who question the media's official narrative.  The following four verses might indicate events which have not yet taken place.  Notice, however, that they all have the same ominous and portentous tone of justice, and all appear as the 14th verse of a 12th chapter.

Proverbs 12:14- "A man will be satisfied with good by the fruit of his mouth, and the recompense of a man's hand will be rendered to him."

Ecclesiastes 12:14- "For God will bring every work into judgment, including every secret thing, whether good or evil.

Jeremiah 12:14- "Against all my evil neighbors who touch the inheritance, I will pluck them out of their land."

Ezekiel 12:14- "I will scatter to every wind all who are around to help him and all his troops, and I will draw out the sword after them."

Hosea 12:14- "...therefore the Lord will leave the guilt of his bloodshed upon him."

There are 11 books in the Old Testament after Hosea, but none of them contain a 14th verse in a 12th chapter, indicating that the saga has come to an end with justice (divine or otherwise) being served.


Rev. 12:14- "But the woman was given two wings of a great eagle, that she might fly into the wilderness to her place, where she is nourished for a time and times and a half a time, from the presence of the serpent."


In many Bibles, this story is given the title "The Woman, the Child, and the Dragon".  It could very well also be "The Ballad of Nancy Lanza".  The two wings of an eagle could refer to Nancy's sons, Ryan and Adam.  The "great eagle" could refer to Peter Lanza, who works for GE- one of the world's largest producers of aircraft engines.  Peter's alimony and child support payments allowed Nancy to live a life of travel and leisure.  She spent her final days at the Omni Mount Washington Resort (where she was conceivably "nourished") in the wilderness of New Hampshire, the place of her birth.

She arrived at the resort on the afternoon of Tuesday, December 11, and checked out on Thursday (a time and times and a half of time?).  Adam Lanza- the "serpent"- did not accompany her on the trip, and is said to have murdered her the following morning.

If that doesn't send shivers up your spine, then I don't know what will.

(Disclaimer: The Bible can be interpreted many different ways.  This is just one of several possible interpretations and should not be construed as "evidence" or proof of any conspiracy, hoax, or cover-up.  It is merely provided for entertainment purposes only.)