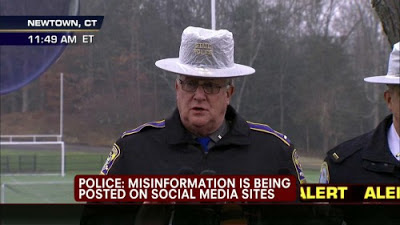 One of the cornerstones of the Sandy Hook Truther movement is the allegation that many of the Newtown residents interviewed by the media were paid actors, perhaps hired by the government in order to sell President Obama's anti-gun agenda.  While definitive evidence proving this claim remains to be seen, it appears that one prominent Newtown figure did in fact pursue an opportunity to appear on network television- as a contestant on a popular reality show.  That man is police spokesperson Lt. J. Paul Vance.

According to a March 9, 2011 article in the Connecticut Post, Vance auditioned for the reality show Survivor during an open casting call held at the Foxwoods Resort Casino in Mashantucket.  The Connecticut Post states:

State Police spokesman Lt. J. Paul Vance is a frequent guest on local TV and radio shows. Now he wants to take his talents to a completely different type of television.

Vance announced on WPLR radio this morning that he intends to try out for the next season of "Survivor." Tryouts are next Wednesday at Foxwoods.

He told the Connecticut Post that he will "do the interview (with Survivor) and explore the process."


The cantankerous police spokesman, who has become one of the most recognizable faces of the Newtown media frenzy, apparently made the decision at the prodding of his son, who called in to the WPLR "Chaz and A.J." show on March 8, 2011 in order to publicly nominate his father for a spot on "Survivor".  The lieutenant's son, J. Paul Vance Jr., was a former candidate for Waterbury mayor.  The following day, Lt. Vance appeared on WPLR and said that he was "up to the tall order".

At one point during the son's radio interview, Vance alludes to his father's proclivity toward appearing on television, making a rather humorous quip:

"He is on TV, he is kind of cranky, he'd be good on an island, and his wife would like to send him to an island."

At another point in the WPLR interview, one of the hosts of the radio show openly refers to Lt. Paul Vance as a "local celebrity".

Interestingly, the Connecticut Post article indicates that Lt. Vance may have used his status as a "local celebrity" to bully his way to the front of the audition line.  The article states that Vance received a "cut the line pass" from the producers of the reality show, ensuring that the curmudgeonly lawman got an opportunity to wow the judges.


(the original Connecticut Post article can be read here)

Recap of our continuing investigation of Sandy Hook: