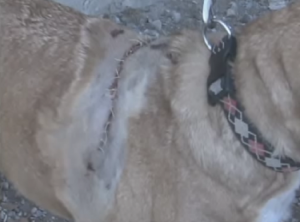 Last year, JOTB broke the story about a strange giant crayfish-like creature found inside a cave in Pennsylvania, and our contention was that this animal- heretofore unknown to science- may also be the creature responsible for cattle mutilations (read "Is there a link between cattle mutilations and mystery creature?" from May, 2012).

In that article, we wrote about a named named John Click, a former Marine and Baptist minister who claims to have witnessed a bioluminescent crab-like creature with a scorpion-like tail attacking a cow in Nebraska in 2007.  The description of the creature which Mr. Click gave to Linda Moulton Howe ("Earthfiles", Episode 20) is a spot-on match to the mystery Pennsylvania cave creature, and our follow-up investigation uncovered a few interesting facts: (1) cattle mutilations often occur in areas which have a lot of caves, (2) the cattle victimized by this mystery creature tends to be smaller in size, and (3) cattle mutilations are often accompanied by a glowing light.


It now appears that this same cryptid may also be responsible for a string of canine attacks in Newton County, Missouri.

Since November of last year, 8 dogs from one part of Neosho, Missouri, have been attacked by an unknown creature, which has thus far claimed the lives of two of the canines.  Two of the victimized animals belonged to Reta Liles, who described the wounds to KSN Local News: “Two slashes across her back, and in some places, it’s two inches deep.”

This story was corroborated by a neighbor, Leanna Williams, who is president of the Faithful Friends Animal Advocates.  Williams' statement to the Neosha Daily News reads:  "My neighbor (and friend) had called me to say her Puggle, Punk’n, had been seriously injured with deep lacerations, across her back that started at her rib cage on one side and went all the way to her belly on the other side, as if something had tried to open her up like a can opener. " Williams also speculates that the mystery creature seems to attack for sport, rather than for food: "It does not drag off or eat whatever it attacks but just leaves it to die. We are concerned about letting our dogs (or family members) spend time outdoors, especially at night."
Residents of Neosho have since hired professional trackers to hunt down the mystery creature, and the game commission has stated that they won’t intervene until visual evidence of the beast is presented.

Interestingly, Newton County certainly does not lack caves.  Newtoncountymotourism.org states: Because of the geology in this area, there are a few small caves located in most every section of the Newton County.  In his book "Missouri Caves in Hostory and Legend", author H. Dwight Weaver described several caves in Newton County, including many that were used as meeting places by the Ku Klux Klan.

Coincidentally, just 16 miles away from Neosho, there is a famous local legend about mysterious glowing lights which have been seen since the late 19th century.  The legend states that mysterious white-yellow lights often appear along a country road which has come to be known as Spook Light Road, near the Missouri village of Hornet- just a stone's throw away from the recent dog mutilations.  (read more about Spook Light Road here).

The wounds on the dogs at first appear to have been caused by something with claws, leading many locals to believe that the culprit is a coyote or a mountain lion.  However, as evidenced by the picture of one of the mauled dogs, we can see that the laceration is not a clean line, but rather a jagged gash- consistent with wounds often found in cattle mutilations.  These wounds may have been the work of an animal with large, powerful lobster-like claws.  This also supports the statement given by Leanna Williams, in which she stated that the dog looked as if  "something had tried to open her up like a can opener".

Since the wounds often appear on the backs of the dogs, this would also coincide with the description of the crab-like creature seen by John Click:  "He described this creature as a football-shaped animal with hairless yellowish skin, which looked like a cross between a crab and a scorpion.  It had attached itself to the back of a cow, which was bellowing in pain, and Mr. Click observed a red fluid passing through the creature's tail, as if the animal was sucking the blood of the cow.  Mr. Click also observed a white-yellow ball of light near the creature."

While the locals of Neosho suspect that a mountain lion is to blame for the attacks, perhaps the trackers and hunters might want to poke around inside some of the caves in Newton County- keeping their eyes open for a strange half-crab half-scorpion creature, such as the one found in Pennsylvania, or the one described by the former Marine and minister named John Click.