Ultimate Survival Guide: How to Survive a Bigfoot Attack 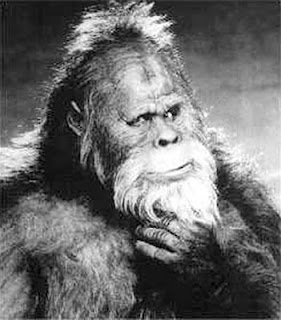 Most of the granola-munching hippie population would have you believe that Bigfoot is a peaceful giant, misunderstood by others, shunning society (and clothing) and preferring to live a life of quiet seclusion. But, of course, you know better. You know that Bigfoot is really a blood-thirsty maniac with an insatiable appetite for human flesh, lurking in the shadows of the wilderness in wait for his unsuspecting prey (much like Ted Nugent).

You may or may not know what it's like to be eaten by a Bigfoot, and luckily, thanks to this article, you will never have to find out.

When it comes to fending off vicious creatures, such as Bigfoots, werewolves, and Girl Scouts, preparation is key. Never venture into the woods alone unless you have the proper tools for self-defense. When it comes to Bigfoot, the best tool for preventing an attack is pepper spray (pepper spray also works on wolves, bears, puppies, and the Abominable Snowman).

Unlike a wild boar which charges its prey, Bigfoot prefers the ambush method. He will hide behind a tree or a large bush, and is very adept at making bird calls. It is a common misconception that Bigfoot howls or growls. This is untrue. Bigfoots (or is it Bigfeet?) do not have highly-developed vocal cords, but they are excellent at whistling. A Bigfoot will use this skill to disguise and camouflage his movements. In other words, if you hear a rustling noise coming from behind a tree followed by incessant tweeting, there's a very good chance that Bigfoot is lurking nearby.

When a Bigfoot attacks, he will prefer to attack from behind, wrapping his big hairy mitts around your waist before sinking his teeth into your neck. To prevent this from happening, you may choose to wear a neck brace while traipsing around in the woods. As soon as you feel Bigfoot's hairy arms around your midsection, turn around and spray the creature in the eyes with your pepper spray. This won't kill Bigfoot, but it will cause him to release his grip.  If, on the other hand, Bigfoot does not release his grip, you may be in big trouble since he probably doesn't take too kindly to being sprayed with pepper spray (much like an Occupy Wall Street protester).

Even though Bigfoot is stealthy, he is very slow afoot. As Bigfoot sinks to his knees and wipes the pepper spray from his eyes, run away as fast as you can. Do not stay and fight with Bigfoot, and above all do not attempt to photograph Bigfoot. There is a reason why so few pictures of Bigfoot exist; it is because most of the people who take Bigfoot's picture are eaten shortly thereafter.

Editor's Note: This article is not intended to serve as actual advice should you encounter an angry Bigfoot.
Bigfoot humor