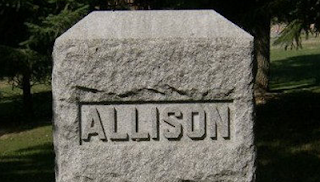 Out of the thousand of ghost stories which come from Pennsylvania, few are as popular as the story of Headless Allison, a decapitated apparition said to haunt the roadside of Duboistown and South Williamsport in Lycoming County.  So famous is this ghost that the story of Allison's Grave has appeared in countless books over the years (such as Weird Pennsylvania, by Matt Lake).  Allison's Grave has also been frequented by "paranormal investigation"  groups for television audiences.  (We use the quotation marks because we believe that many of these groups give real researchers a bad name.  Research consists of more than prowling around with video cameras... it involves, well, research).  One such paranormal investigator is Craig Rupp (and Lycoming County native), whose 13 years of ghosthunting experience has led to appearances on the Travel Channel and the Discovery Channel.

There has been much speculation over just who exactly the Allison is in this oft-told tale which has been popular for decades.  According to Matt Lake (who continues to sell books, in spite of being one of the most inept "researchers" out there- we've debunked his stories before, such as this one), Allison was a WWI nurse whose plane was shot down.  She was decapitated, and her remains sent back to the local cemetery on Mosquito Valley Road.  If Matt Lake had taken the time to look at the gravesite in Lycoming County, he would've realized that the only headstone bearing the Allison name belongs to that of Edna Allison, who died in 1964.

Back in 2009, NorthCentralPA.com published a story entitled Allison's Grave: In Search of the Truth.   The author enlisted the help of a group which calls themselves Heart of Pennsylvania Paranormal Society (HOPPS), in order to find the true identity of Allison.  The ghosthunting group concluded that the woman in question was Edna Allison, who died in a plane crash near Aspen in 1964.  However, when Edna's body was found- though badly decomposed- it was still buckled to the seat.  It seems highly unlikely that she would've lost her head.

But, perhaps the most overlooked detail in the story of Headless Allison is that the ghost story pre-dates the death of Edna Allison.  This makes it especially comical to read reports from professional and amateur ghosthunting groups who claim to have gathered all kinds of spooky evidence in the vicinity of Edna's gravesite.

The only way to determine the identity of this famous ghost is to compile every report of a sighting, and focus on the earliest known version.  We at JOTB have done just that.

The earliest recorded account of the headless apparition in South Williamsport took place in 1899, and was reported in detail in the Sept. 28 edition of several local papers, such as this account, which was published by the Columbian (Bloomsburg, PA), under the headline A Phantom Object Frightens the People of South Williamsport:

People living in South Williamsport are greatly agitated by a strange apparition which appears nightly- that of a headless woman dressed in long, flowing white robes.

Sunday night, a young woman ran screaming into the residence of a Mrs. Houser and said that the figure had walked by her side in a lonely place along the edge of a high retaining wall skirting a dark ravine and cavorting in a most terrifying manner.  A young man returning from a visit to his girl saw it in the shape of a phantom dog, which, when he kicked it, as he did repeatedly, was always far enough away to miss his foot, finally vanishing entirely, when he lost his nerve and ran home.

Superstitious people believe the ghost is that of an unknown woman whose skeleton was found on the mountains back of Duboistown.  many are afraid to venture out after nightfall.
(view the original 1899 newspaper story here)

As someone who resided in Williamsport for several years- and has heard every possible version of the story- I can attest that the "mountains back of Duboistown" refers to the Mosquito Valley of the Allison's Grave myth.  Since this apparition has been since since 1899, this rules out the possibility that Allison was a WWI or WWII nurse, or that she was Edna Allison, who died in 1964.


Writing this article has brought back many memories of my days living in Lycoming County and, although I have never seen Headless Allison, I have had my fair share of unexplained experiences while residing in the area, which I shall write about another time.  Stay tuned.