Doll in the Water: A True Spooky Story From Pennsylvania 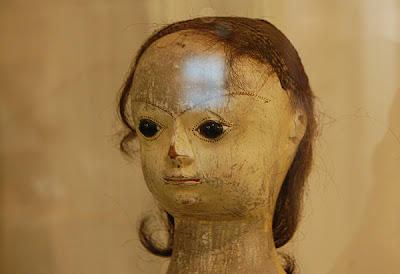 This week, Journal of the Bizarre brings you a real-life "ghost" story, as told by our contributor Marlin Bressi.  If you have a true ghost story you'd like to share, or a story about an unusual or unexplained event, send it to our editor at annanewburg@yahoo.com


Located in wild and scenic Lycoming County, Pennsylvania, is a popular trout stream called Muncy Creek. I had fished every mile of this stream, from its confluence with the Susquehanna River near the site of the 18th century Fort Muncy, to the stream's headwaters in Sullivan County, three or four wiles east of the sleepy village of Nordmont.

Now, most trout anglers will tell you that the best way to work a stream is by starting at the headwaters and fishing your way downstream, as to not "spook" the fish. In this manner, you are able to approach the fish from behind, since they often position themselves with their heads pointed upstream in order to snatch any food which is floating down. However, for a change of pace, I worked my way upstream on this particular day. Had I worked my way downstream, the strange story of the doll in the water might have had a logical explanation.

On that chilly spring morning in 2007, I had waded into the stream near the site of the old black iron bridge near Tivoli (which has since been replaced by a concrete bridge). Here is a lovely stretch of water, where the stream is clear as crystal and flows as slowly as molasses. Within minutes, my line was snagged on what I assumed was a large rock. Since the water level was low, I waded to the spot of my entanglement, instead of cutting my line.  To my surprise, my hook was not snagged on a rock or an underwater log- but on a child's doll.

With curiosity getting the better of me, I reached in to icy water and retrieved the doll, which was rather strange in appearance. It was the size of an infant, quite old in appearance, but it was the doll's face which startled me the most- it looked as though it had been deformed or melted. The doll was white in color, and appeared to be made from porcelain. Her blank face held no expression because the lips and eyes that must have been painted on had long since washed away.

I waded back to the bank of the stream with the strange faceless doll in hand, planning on taking it home with me since it appeared to be rather old and possibly worth a few dollars in a local antique shop. However, much to my disgust, I turned the doll over and saw that it was infested with hundreds of tiny leeches. My reaction was to immediately throw the doll into the woods, where it landed with a splash in a green bog of brackish water which had formed a slime-covered pool about twenty feet away from the creek.

Leaving the spot, I walked through a thick patch of woods until I came to a farmer's field. I had my intentions set upon working a deep hole a few hundred feet upstream, which always rewarded me with a large brown trout. I managed to catch two large fish in this deep hole before turning my attention to the stretch of water immediately upstream.

Once again, I snagged my line, and once again I waded to the spot. Looking down, I saw the same faceless white doll! "What are the odds of finding two porcelain dolls in the same stream, less than a mile apart?" I wondered. Remembering the leeches, I cut the line instead of picking up the doll. I remember this well, because I was using my best hooks: Gamakatsu laser-sharpened hooks, with a bright red finish. I preferred these red hooks to bronze hooks when using worms as bait because the red hooks look like blood in the water. These hooks are expensive, as any angler will tell you, which is why I was not happy about cutting the line.

The rest of the morning passed uneventfully, and a few hours later I had worked my way a few miles upstream, past the tiny village of Glen Mawr. Wading into Muncy Creek, which is narrow and shallow at this point, I spotted the doll once again!  This time she was sitting on a pile of rock on the opposite bank, as if she had been placed there carefully by a child.  I waded across the creek and picked up the doll with the blank deformed face. Stuck in the joint where the doll's head was attached to the body was a red fish hook, proving that it was indeed the same doll which had haunted me all morning, somehow following me upstream for nearly two miles.

That was the last time I had fished Muncy Creek, having moved to a different part of the state a few months later.  To the best of my knowledge that mysterious doll is still out there, perhaps where I had left it near the village of Glen Mawr.