on February 22, 2013
Since 2011, loud booms and flashes of light have been reported all over America.  UFOs? Secret military operations?  The truth, unfortunately, is far more mundane. 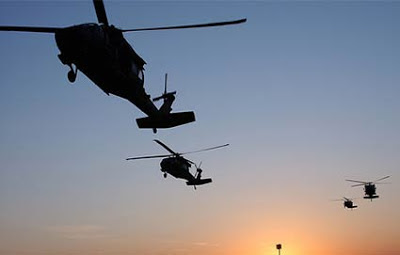 Since 2011, hundreds of reports of mysterious booms and flashes of light have been reported from every corner of the country, from California to Florida, from Rhode Island to Alaska.  In some of these cases, these explosions have been accompanied by sightings of military helicopters.

Linda Moulton Howe, host of Earthfiles and frequent guest on Coast to Coast AM, has done a terrific job of cataloging these events on the Earthfiles website.  Many of these mysterious booms have been reported to police and government agencies, but the responses indicate that no one really knows the cause of these events.  Even more interesting is the fact that, in spite of the window-ratting and ground shaking tremors, there is no USGS record of seismic activity in these areas during the time the booms took place.  This would indicate that the explosions are man-made, and not the work of Mother Nature.

According to the reports on Earthfiles, it appears that there are certain areas where these strange booms are common.  Ohio, Illinois, California, Michigan, and Arizona all seem be dealing with an ongoing plague of mysterious booms.

Some sources have pointed to fracking as the culprit, but many of these reports come from areas with zero natural gas production.  In response to a series of booms heard in Tennessee on Feb. 12 of 2013, Meg Lockhart, a spokesperson for the state's Dept. of Environmental Conservation, issued this statement:
"We have zero oil or gas wells in Hamblen County, and no fracking that occurs any closer than Claiborne or Campbell County."

The USGS and the National Weather Service could not provide an answer to the Tennessee booms, and the FAA reported that no military flights took place in the vicinity during these unexplained explosions.

It is the opinion of JOTB that these "mystery booms" are not the result of secret military operations, and have nothing at all to do with UFOs, as some "researchers" suggest.  We believe that fracking is the source of these explosions... in a roundabout way.

As the push for natural gas drilling increases (especially in the wake of environmentalist opposition to the Keystone pipeline), there is a tremendous need for silica.  "Frac sand"- a type of sand crucial to hydraulic fracturing- is highly in demand.  So much in demand, in fact, that some newspaper articles (such as this one) claim that "Silica Sand is the New Gold".  Sandstone is often exploded to produce this type of sand.  Since there has been a huge sand mining boom since 2011, it should not be surprising that silica mining is probably responsible for the mysterious explosions heard around the country since 2011.

It should also be no surprise that these events take place in regions with vast reserves of silica.  The top three silica-producing states are (1) California (2) Illinois, and (3) Michigan- all states with ongoing mystery booms.  Ohio, Wisconsin, Missouri, and Minnesota aren't far behind.  Many of these booms can be heard in areas that are silica-mining hotspots.  For instance, these booms have been heard around Bakersfield and Los Angeles, California.  Not surprisingly, Bakersfield is home to Carmeuse Industrial Sands, one of the nation's largest suppliers of silica.  Los Angeles is home to Oglebay Norton, another silica giant.  Carmeuse also has a presence in Texas, another state experiencing "mystery booms".  Unimin Corp., which is perhaps the most important silica provider in America, has 5 facilities in Illinois alone- another state where mystery booms are common.  After searching through the Earthfiles library of boom reports, you would be hard-pressed to find a report of a mysterious explosion which did not occur in a silica-mining state or region.

If you're still not convinced that the silica gold rush is behind these explosions, here's something to consider.  The United States Geologicical Survey reports that "the production increase in silica sand in 2010 was largely attributable to surging demand for hydraulic fracturing sand".  Reported average prices for frac sand in the U.S. Geological Survey Minerals Yearbook reached $50 per ton in 2010. This is significantly higher than the average price- $35 per ton.  These prices continued to climb through 2011, 2012, and 2013.  Isn't it odd that there have been zero reports of "mystery booms" prior to 2010?

If you look at the reports listed on the Earthfiles website, you'll see that these boom reports peaked in late January and early February of 2013- coinciding with periods of high silica production.  In fact, every time the price of silica has spiked historically in recent years, reports of "mystery booms" spiked shortly thereafter.  This also happened in October and November of 2012.

But what about the "black helicopters"?

In many of the Earthfiles reports, sightings of military helicopters in the vicinity of the mystery booms take place in areas that already have a large military presence to begin with.  For example, on January 9 of 2013, several reports came in near southern Indiana, southern Illinois, and northwest Kentucky.  One man reported seeing an AH64 Apache helicopter.  The bulk of these reports came from the vicinity of Fort Knox, where Apache and Blackhawk helicopters in the sky are as common as birds.

Another mystery boom followed by military helicopter sightings occurred near San Miguel, Arizona, in December of 2012.  San Miguel, in Pinas County, is surrounded by not one, not two, not three, not four, not five, but SEVEN military bases, including three Air Force bases alone.  Davis-Monthan AFB is one of the busiest military compounds in America, and Luke AFB is one of the largest bases in the entire world.  In other words, it would be more strange to NOT spot any military helicopters in this area (an area, coincidentally, where silica mining is performed).

Let's not forget the illegal mining operations.  Since silica is the "new gold", we should expect to see rogue operators popping up all over the place.  Just as gold and silver rushes drew prospectors from all over the country to places like Alaska and California in the 19th century, the silica rush will draw modern-day prospectors to places where sand and sandstone are in abundance.  Since explosives are necessary to break up the sandstone, these explosions just might arouse the attention of the military- as it should.  Considering the overwhelming number of strange booms reported to police, the FAA, and the USGS, it only stands to reason that the government would dispatch some helicopters to the scene.  To do otherwise would be dereliction of duty.

Unfortunately, many people prefer to believe that these strange booms are somehow related to top-secret military operations or UFO activity.  It's only natural to believe the more extraordinary theories over mundane common sense explanations, because there's nothing all that exciting about mining for sand.  However, the proof speaks for itself.  Mystery booms occur in places where silica is being mined (legally or otherwise) and these booms take place at the exact time when frac sand is in high demand.  Meanwhile, military helicopters are being spotted in places where military helicopters have already been spotted on a regular basis.