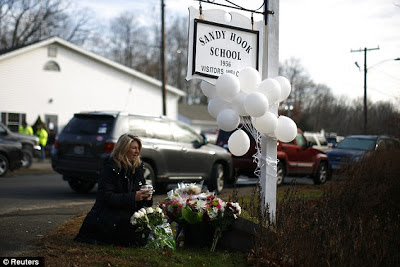 One reason why Sandy Hook would be difficult to "stage" is because it involved a public school, which means that there should be plenty of records available to the public- including public records of the teachers' credentials.  Even kindergarten teachers need to be licensed or certified, and most kindergarten teachers cannot become licensed without a bachelor's degree in early childhood education.   In Connecticut, you can't even work in a day care without some level of state certification. However, this requirement does not apply to teachers in private or parochial schools.

Sandy Hook Elementary is a public school, which means that every teacher needs to have some sort of licensure or certification.  The Connecticut State Department of Education states:

The Connecticut State Department of Education maintains an interactive license verification system, which allows users to check the credentials of school employees.  Information concerning an educator’s certification is available to the public pursuant to the Freedom of Information Act, Conn. Gen. Stat. § 1-200 et seq. (FOIA). The Bureau of Educator Standards and Certification has made the information publicly available to provide immediate access to certification information.

Other professionals, such as healthcare workers, psychologists, and therapists, are required to be licensed by the state, and these credentials can be verified by visiting the State of Connecticut eLicensing website.

Let's see if the the teachers and staff members killed at Sandy Hook really had the credentials reported by the media.

In most states, behavioral therapists are required to be board certified and/or licensed.  Ms. Davino's credentials could not be found in any Connecticut database.  Connecticut requires teacher's aides to be certified, yet Ms. Davino appears not to have had any such certification- not as a teacher, teacher's aide, assistant, or behavioral therapist.

Ms. Sherlach is reported to have been a veteran psychologist who was looking forward to her retirement.  Although she is said to have been one of the victims who died on December 14, 2012, a search for her credentials on the Connecticut Educator Certification System reveals that her current license (which is valid for a period of five years), is valid from 1/12/13 to 1/11/18.  Yes, somehow she managed to renew her license after her death.  Nothing weird about that. 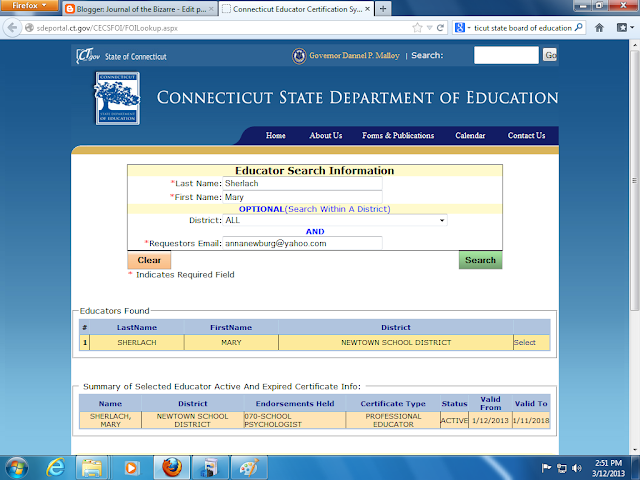 Ms. Rousseau did have an active license in the state of Connecticut, which was issued on 12/21/11, and was valid through 2014.  She began working at Sandy Hook Elementary School only weeks before her death.  If Sandy Hook was designed to be some sort of hoax, Ms. Rousseau, sadly, wasn't "in" on the joke.

Ms. Murphy's credentials do show up on the CT Dept. of Education verification system, but the information provided raises some questions.  For instance, records show that her license was issued in November of 1988, but the space where the expiration date should be is left blank (as well as the name of the school district). 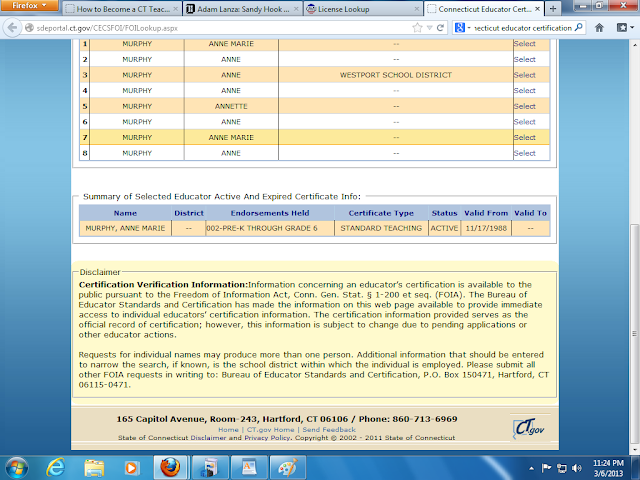 Ms. Hochsprung became principal at Sandy Hook two years before the shooting. She viewed her school as a model, telling The Newtown Bee in 2010 that "I don't think you could find a more positive place to bring students to every day."  It is said that she died while charging the gunman.

Next to Adam Lanza himself, Victoria Soto is one of the most famous faces of the Sandy Hook massacre.  Ms. Soto's credentials do check out.  As you can see, she held a 3-year Initial Educator Certificate, which was issued on 2/21/11 and set to expire on 8/31/13.  Her results also list that she worked for the Newtown School District. 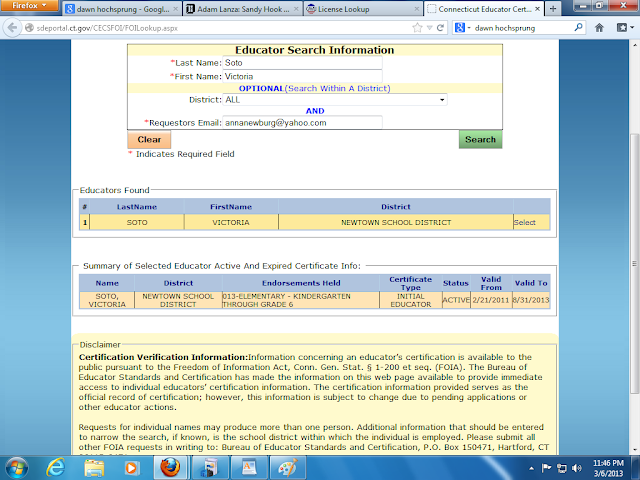 Could it be possible that a shooting did occur at Sandy Hook, but the body count was so low that the media had to "invent" additional victims in order to better sell the story to the public?  Who knows, but we wouldn't be surprised.  Very few people care about a shootings with a low number of casualties (look at how quickly we've forgotten about the Clackamas mall shooting which took place a few days before Sandy Hook).  But, manufacture a mass murder that's on par with Columbine or Virginia Tech, sprinkle in adorable children, heroic teachers, and well-groomed parents who appear to be made-for-TV, and you've got yourself ratings gold.