Hugh Cameron, the Hermit of Kansas 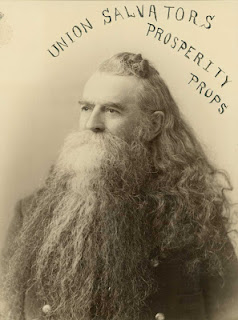 Hugh Cameron, who came to be known as "The Hermit of Kansas", is famous as an abolitionist, teacher, and military commander, but is perhaps best remembered for his eccentric behavior, which included living in a wooden piano box.

Born in 1826 on a farm near Saratoga Springs in New York, Hugh Cameron was the son of a Scottish immigrant, and was one of the eight children born to Catherine Frazier.  Hugh was almost entirely self educated, and didn't set foot into a classroom until he was eighteen years old.

At the age of 23, Hugh was hired as a mathematics teacher in Washington, DC.  While in Washington, he formed friendships with many influential people, who would become lifelong friends.  These friends included prominent men such as Daniel Webster and Stephen Douglas.

Because of his strong opposition to slavery, Hugh Cameron became a very polarizing figure within Washington's social circles.  He made powerful friends as well as powerful enemies.  One of his closest friends was Gen. William Chaplain, who created a major buzz in the 1850s when he was arrested fro trying to free slaves belonging to a congressman from Georgia.  Hugh Cameron was accused of being an accomplice in this crime and was fired from his teaching position.  A few days later, Hugh was attacked by a pro-slavery mob on the streets of Washington.  It is said that Hugh would've been killed if not for the intervention of  Henry Clay, who was the senator from Kentucky at the time of the incident.

Shortly after this incident Hugh was appointed to a position within the Treasury Department, but his political career in Washington was cut short when Hugh developed serious health problems related to a lung hemorrhage.  Hugh obtained work as a door-to-door salesman selling magazine subscriptions and eventually teamed up with a group of New England abolitionists where were heading to Kansas Territory.

In 1853, Hugh set out on foot to Kansas.  He walked to St. Louis, where he joined the Emigrant Aid Society party from Massachusetts.  From St. Louis, Hugh and his party traveled to Kansas City.  From there, Hugh once again set out on foot, walking upstream along the Kansas River.  He set up camp at a bend in the river, which today is the site of Lawrence, Kansas.

Hugh was appointed judge for the Kansas Territory by Governor Reeder, who was also a close friend of Stephen Douglas.  Under the next governor, Wilson Shannon, Hugh was appointed the first justice of the peace for the settlement of Lawrence.  It has been written that Hugh Cameron may have played a pivotal role in preventing Kansas from becoming a slave state.  During the territorial elections, many outlaws from the neighboring slave state of Missouri crossed over into Kansas in the hopes of swaying election results by casting fraudulent ballots.  Thanks to Hugh's efforts, these fraudulent voters were kept at bay, thus preventing the election of pro-slavery candidates.

During the Civil War, Cameron enlisted and served two years in the 2nd Kansas Cavalry, earning the rank of captain. He then served four years in the 2nd Arkansas Cavalry and rose to the rank of lieutenant colonel.
For one reason or another, Hugh Cameron decided one day that he wanted to be a hermit.  He spent his later years making his home inside of a wooden piano crate along the banks of the Kansas River, three miles northwest of Lawrence.  To this day, the area is still known as Cameron's Bluffs.

Although Hugh chose to live in a wooden box, he was a veritable celebrity in his day.  Until his death in 1907, at the age of 81, Hugh would set out for Washington on foot in order to attend special events.  Locals recalled that he would often be seen embarking on these journeys dressed in his blue military jacket with brass buttons- a stark contrast to his snowy beard and long white hair.