Boston Marathon Hoax: Get ready for the conspiracy theories! 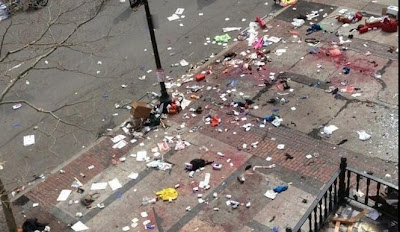 Just hours after the Boston Marathon was turned into a crime scene, conspiracy kooks are already trying to convince the world that this latest tragedy was a hoax (perhaps conspiracy kooks live in a universe in which no one ever dies).  While there is a mountain of inconsistencies surrounding Sandy Hook, today's tragedy doesn't even remotely resemble the Newtown shooting.

Many of us watched the Boston incident unfold, and those of us who have recollections of Sandy Hook fresh in our minds couldn't help but watch the news and compare how the media covered the two events.  The verdict?  Look around the Internet, and you'll find that even most Sandy Hook doubters are convinced that the Boston Marathon bombing is 100% real.

One of the more outrageous claims circulating around the fringes of the Internet is that the explosion in Boston was caused by a harmless smoke bomb.  With tens of thousands of specators in the vicinity- most of them armed with cameras and cell phones- the world will have a multitude of videos made by actual witnesses.  One video, such as this one, captures the moment when the bomb exploded.  You can clearly see the damage to buildings and property.  So much for the "smoke bomb" theory.


For those of you keeping score at home, here's a brief list of the major differences between Sandy Hook and Boston.

1.  Within minutes of the Boston explosion, videos made by witnesses at the scene were uploaded to YouTube.  To date, we have not seen an "amateur" video made by anyone in the vicinity of Sandy Hook on the day of the Newtown massacre.

Granted, there were thousands of spectators in Boston, but you would think that at least one of Newtown's 27,829 residents would have been filming the unfolding events.

3.  Mere hours after the Boston explosion, authorities disclosed troves of important information, even though the investigation is ongoing.  We have learned that suspicious devices were found inside Boston’s Mandarin and Lenox hotels and dismantled by experts.  We learned of the gruesome injuries suffered.  A spokesperson for Tufts Medical Center said that the hospital is treating nine patients for conditions such as shrapnel wounds, ruptured ear drums, and lower leg trauma.

On the other hand, Connecticut authorities didn't officially disclose what was found inside the Lanza home for several weeks and, to date, the names of those wounded at Sandy Hook haven't been disclosed, nor have their injuries.  Authorities in Massachusetts, however, have been very forthcoming with releasing details as they emerge.

4.  Boston has established a hotline for information on loved ones.  By calling 617-635-4500, people can find out if anyone they know has been injured in the explosion.  No such "hotline" was ever established while the events at Sandy Hook were unfolding.

5. It has been reported that, in Boston, police are actively seeking amateur video in hopes of gleaning more insight into the explosions.  On the other hand, hundreds of amateur videos made concerning Sandy Hook were removed from sites like YouTube.  Pictures were deleted from sites like Photobucket and Tumblr.  Sandy Hook was all about secrecy, suppression of information, and censorship- the opposite of what we are seeing right now in Boston.

6. The Newtown shooter was named immediately after the incident.  Even though he was initially misidentified, the public was given a name and a face from the early stages.  Boston police have detained a person of interest, said to be a Saudi national, yet they still have not disclosed the suspect's name.  In other words, authorities rushed to give us an identity in Newtown, but they are treating the Boston bombing with caution.

Take all of these factors into consideration, and it is clear that each tragic event has been treated differently by the media, witnesses, and authorities.  One screams real, while the other screams something else entirely.

To those who still insist that the Boston Marathon bombing was a hoax, ask yourself the following questions:

- If the government did such a lousy job faking Sandy Hook, why would they attempt to pull off an even bigger stunt in a major American city in front of tens of thousands of eyewitnesses?

- If the government and media used children as pawns in order to push an agenda with Sandy Hook, what would they have to gain making pawns of long-distance runners?  Does Uncle Sam wants to take away our Nikes?

-Some "Boston Marathon Truthers" insist that the injuries suffered were fake.  One such kook even uploaded a video claiming that the man whose leg got blown off was photoshopped.  Many witnesses state they saw missing limbs on victims.  How the heck would FEMA or the Department of Homeland Security fake those injuries?  Are we to believe that "crisis actors" somehow applied fake blood and makeup right after the blast (in front of thousands of witnesses, mind you) without anyone taking notice?

The bottom line is that there is no possible motive for faking the Boston bombing.  Such an operation would've been too complicated, too costly to plan, and there would have been too many witnesses with cameras.

UPDATE: Hmm, maybe we were too quick on this one.  JOTB has uncovered evidence which shows that the Dept. of Homeland Security gave hundreds of thousands of dollars to emergency responders in both Sandy Hook and Watertown, as part of a FEMA program designed "to ensure effective coordination during incident response".  Full article can be read here.