Boston Marathon Hoax: The Mystery Man on the Roof 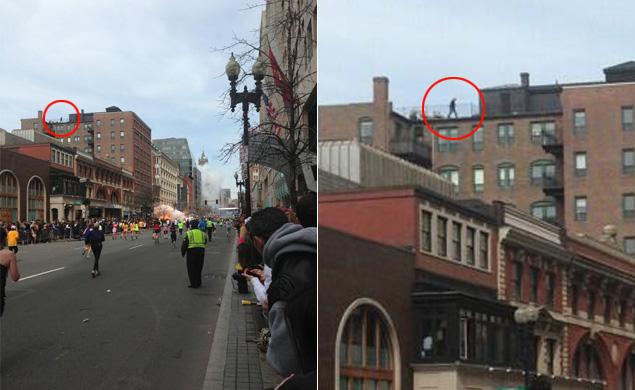 When I woke up this morning, my inbox exploded with emails from readers who wanted to know more about the "mystery man on the roof".  The above picture, taken by spectator Dan Lampariello, shows what appears to be a man on the roof of a building near the site of the second bomb.  Conspiracy theorists are having a field day with this one.

My opinion?  Let's reserve judgment until more information is available.  One man on a rooftop does not make a conspiracy.  Now, if someone enhances the photo and we see that he's wearing a FEMA jacket or a Department of Homeland Security shirt, well then that's a horse of a different color.  But to exclaim, "There was a man on a roof, this PROVES it was all a hoax!" is beyond absurd.

For all we know, the man on the roof could've been a spectator.  If you've ever gone to a marathon, you'll know this is not uncommon.  But to be so close to the explosion?  Weird? Yes.  Creepy?  Absolutely.  But until someone uncovers more info about the stranger's identity, crying "hoax" will only make you look like an idiot.

Another question I've been asked was, "If it's not a hoax, why did they turn off cell phone service after the explosion?"  Conspiracy kooks claim that this was done in order to prevent people from snapping incriminating footage.  In reality, this was done because cell phones are often used to detonate explosive devices, and at the time there may have been more unexploded bombs in the vicinity.  Besides, even without cell service, cameras are still capable of working.

More on Boston conspiracy claims as they develop.