Glow in the dark sheep created by scientists in Uruguay 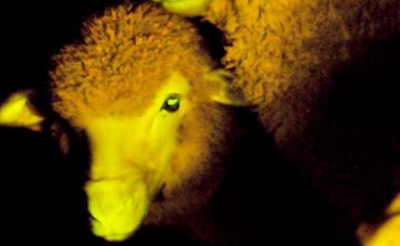 What do you get when you cross a jellyfish with a sheep?  Apparently, thanks to the marvels of modern science, you get a sheep that glows in the dark.

Scientists in Uruguay have modified the genes of sheep by using a fluorescent protein found in the Aequarea jelly fish.  The sheep, born last October at Uruguay's Animal Reproduction Institute, glow a green color when they are exposed to ultraviolet light.  The leader of the research team, Alejo Menchaca, states that these green mutant sheep and developing normally.

Fluorescent proteins from jellyfish have been used to create a variety of glow-in-the-dark animals in recent years.  Some of these genetically-modified creatures, such as scorpions and "GloFish", are sold in pet stores.  Worms that glow in the dark are also sold to fishermen in a variety of outdoors shops.

Scientists, however, say that there's more to creating glow in the dark sheep than hust the "fun" factor.  Menchaca believes that this technique can be used by the medical profession to assist in the diagnosis of disease.