"It was staged!" insists Boston suspect's father and aunt 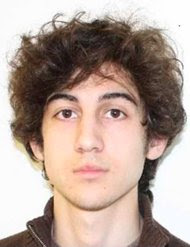 Shortly before 2:30 pm EST, news networks aired an interview with the aunt of alleged Boston Marathon bombers Dzhokhar Tsarnaev and Tamerlan Tsarnaev.  According to the aunt, she had called the FBI upon seeing the photos of the suspects and recognizing the two young Chechen men.  Her reason for calling was to inform the FBI that Tamerlan and Dzhokhar couldn't have been the bombers.  She then told reporters that she believed that her nephews had been set up.  When asked by one reporter who would be behind such a conspiracy, the aunt stopped just short of saying that it was the government, and dodged the question.

These cryptic remarks came on the heels of similar strange and unnerving comments made by Anzor Tsarnaev, the father of the suspected Boston Marathon bombers.  In an interview with ABC News, Anzor stated that if his younger son was killed, that "all hell would break loose".

"If they kill my second child, I will know that it is an inside job, a hit job. The police are to blame," Anzor Tsarnaev told ABC News. "Someone, some organization is out to get them."  He then added that the kids were set up, and added that neither had any experience with explosives.

Were the Tsarnaev brothers set up simply because they were Muslim?

The authorities, of course, believe that they have ample evidence proving that the Tsarnaev brothers were behind the Boston Marathon bombings.  During the police manhunt, the older brother was killed in a gunfight with law enforcement.  The Boston area remains under lockdown while the younger Tsarnaev remains at large.

This development raises plenty of eyebrows, since it's doubtful that the authorities have the Constitutional right to keep an entire city under siege, refusing to allow citizens out of their homes.  This isn't wartime.  This wasn't even the deadliest explosion that took place in America this week.

If the family of the Tsarnaevs are correct in stating that the brothers were set up, keeping an entire city under lockdown would be an ideal way to keep suspicious individuals from crying foul.  It is perversely ironic that Boston- one of the cradles of American independence- is the first American city to be turned into a total police state.

Never before has a manhunt for two "lone wolf" fugitives resulted in the complete authoritarian control of a city.  Oklahoma City remained free in the wake of Timothy McVeigh's actions, most of Manhattan remained accessible after the 9/11 attacks, and Atlanta didn't turn into an ersatz prison after the Olympic bombing.  The decision to keep an entire city hostage is every bit as extreme as any action of any Muslim terrorist.

Adding to the chaos, it is now being reported that authorities are planning a "controlled explosion" as they are currently cordoning off the street where the suspect lived.  It is also claimed that nearly a dozen police officers were injured during the massive manhunt of the Tsarnaev brothers, which culminated in a firefight in Watertown, Mass., leaving the older brother dead.  Meanwhile, local schools and universities are currently being evacuated around the Boston area.

"This is not someone who seemed troubled in high school or shy. He was just one of us. It's very weird," claimed a former classmate, Sierra Schwartz.

A city under lockdown... a controlled explosion by authorities... numerous testimonials from those who claim that the Tsarnaev boys were quiet mild-mannered gentlemen who wouldn't harm a fly... and let's not forget about the "mystery man on the roof" (obviously not one of the Tsarnaev boys) or the Navy SEALS carrying black backpacks, or the passionate claims by relatives that the Chechen boys are being set up.  This incident has the ability to quickly become a conspiracy theorist's wet dream.

The only way to satisfy the skeptics is to take Dzhokhar Tsarnaev alive.