The Color of Ghosts 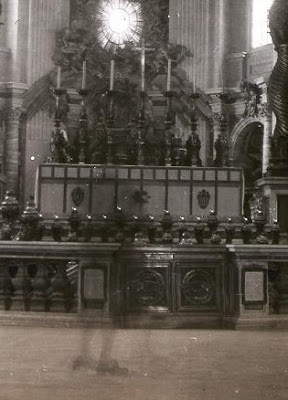 From the Brown Lady who famously haunts England's Raynham Hall to the Red Lady of Huntingdon College, ghosts appear in a wide variety of colors.  Two famous old homes, one in England and one in Ireland, are said to be haunted by "gray ladies", while several British churches are said to be haunted by black phantoms- supposedly the ghosts of long-dead clergymen.  All around the world there have been sightings of colorful (as well as colorless) apparitions, ranging from pale green to shimmering blue.
How can these color variations be explained?

The study of aura colors has been taking place since ancient times, and every color is said to have a meaning.  Let's compare these meanings to "famous" colorful ghosts around the world and see if there's any correlation.

Believed to be the ghost of Lady Dorothy Walpole, this brown apparition has been seen at Raynham Hall in Norfolk, England, since her death in 1726. A photograph of the Brown Lady, taken in 1936, has become one of the most famous and well-known paranormal photographs in history.

While there are many differing opinions about the meaning of a brown aura, it is generally interpreted as negative.  Brown has been interpreted as a color of self-loathing, worthlessness, and guilt. Brown auras are said to be a sign of depleted spiritual energy. According to some holistic practitioners, brown auras are often seen around those who are severely ill or suffering from depression and other mental health problems.

This explanation does seem to fit in with what we know about Lady Walpole.  She was the second wife of British statesman Charles Townshend. When Townshend found out that his wife had committed adultery with the Duke of Wharton, he punished her by locking her in a room at the family estate, Raynham Hall. During her confinement, she died from smallpox.


2. The Red Lady of Huntingdon College

Flowers' Hall of Huntingdon College (in Montgomery, Alabama) is said to have been haunted by two glowing red ghosts.  The identity of the first ghost has never been explained, but she is said to have been seen wandering the dormitory halls at night wearing a Victorian-era scarlet dress and parasol.

The second red lady, according to legend, is the ghost of a former student named Martha, who was sent to Huntingdon against her will by her domineering parents.  Martha was obsessed with the color red (so the story goes) and wore only red clothing.  Depressed and lonely, she committed suicide by slashing her wrists.
Red auras belong to those who are materialistic and superficial, and is also associated with suppressed anger.  This would apply to the Red Lady, although no historical records support the legend.  Every college, it seems, is haunted by a student who committed suicide.

3. The Green Lady of Burlington

Vermont is the reputed home of the Green Lady- the ghost of Elisabeth Palmiter, a young woman who died in 1800. It's hard to ascertain the details of Elisabeth's death; there appears to be dozens of Green Lady legends around Burlington. According to some, she had drowned in a swamp while searching for her husband. Others say that she was murdered by her husband.

However, if the color of a ghost corresponds to the color of an aura, green apparitions would be quite rare.  Those with green auras are said to be peaceful, tranquil, and restful. Ghosts, on the other hand, do not typically fit this description- especially ghosts of murder victims.


4. White, Gray, Black, and Other Colors

Perhaps the reason why so many ghosts appear to be white is because a white aura reflects disease, illness, and imbalance.  Gray auras surround those with sinister thoughts and intentions.  Black auras are associated with pure evil.

However, there are hundreds of "Gray Ladies" and other gray apparitions which belong to people who weren't the least bit sinister or malevolent. Ghosts clad in black are often individuals who were priests, ministers, nuns, and other members of clergy- hardly the types of people who would be "pure evil".  Of course, the color of a ghost's clothing may not necessarily correspond with the ghost's aura... which leads us back to the question, "How do we explain the color variations of ghosts?"

One possibility is that the color of a ghost may depend on geography and specific time periods.  In 1903, the Washington Star newspaper published a short article on the color of ghosts:

Gray, rather than black or white, appears to be the prevailing color worn by the latter-day ghosts.  Two houses, one in England and the other in Ireland, are persistently haunted by what are called "gray ladies".  The Irish spook of this category recently stood in front of a bust of Shakespeare, hidden by her form.  A pair of shoes, thrown at her opaque substance, penetrated it completely and crashed against the marble bust.  A third gray ghost haunting the ancient dormitory of an English college is, on the other hand, transparent... A fourth gray ghost appears as a shadow, singularly distinct and showing all the lines and features of a human being.  Still another spook, that of Colonel Av-Meinander, seen in St. Petersburg, is a gray shadow.  In fact, there are too many gray ghosts for enumeration.

The "sheeted dead" appear to be in a small minority nowadays.  Even black ghosts seem to outnumber them.  The black shade of an ancient clergyman often seen in daylight upon an English country road sometimes wears a white film of vapor enveloping his sable raiment.  The phantom of another clergyman, seen in church, is described as "a black clear mist with the outline of a man".  That of "a little old woman in brown" has long haunted the front yard of a certain cottage, while that of "an old lady in green" bothers a minister of the gospel.

Why are gray ghosts more common in Great Britain than in the United States?  Why are some ghosts drab while others are colorful?

It may just boil down to marketing.  One well-known example is the "Blue Lady" who allegedly haunts the Moss Beach Distillery in California.  This well-known ghost was at the heart of an episode of Ghost Hunters (episode 411), in which investigators discovered a speaker hidden in the ladies room ceiling which transmitted faint pre-recorded laughter (a two-way mirror was also found in the ladies room) and ceiling lamps that moved by way of hidden mechanical devices.

So, whether you are traveling to see a green ghost in Vermont, a red ghost in Alabama, or a blue ghost in California, keep in mind that the color of ghost is more likely to be determined by an entrepreneurial hotel or restaurant owner than by electromagnetic aural emanations.