on May 04, 2013
Will Dorney Park be the site of the government's next false flag operation? 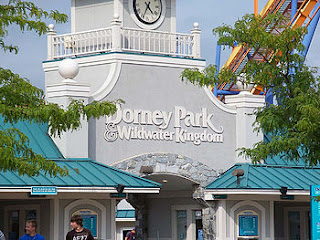 It's no secret that whenever tragedy has struck in America recently, the federal government was conducting large-scale disaster preparedness drills nearby.  From the Newtown shooting to the Boston bombing to the chemical plant explosion in West, Texas, the folks at FEMA have an uncanny track record of popping up a few miles away from disasters, mere hours before the tragedy develops.  Will May 13 be any different?

On May 13, hundreds of emergency responders within FEMA's Region III jurisdiction will descend upon Dorney Park and Wildwater Kingdom near Allentown, effectively turning the entire Lehigh Valley region of eastern Pennsylvania into a mock scene of mass casualties.  The Allentown Morning Call states:

"With the terror of the Boston Marathon fresh in mind, Dorney Park & Wildwater Kingdom will be the site of a large-scale emergency preparedness drill on May 13.  The drill, sponsored by the Northeast Pennsylvania Regional Counter Terrorism Task Force, will center on an emergency incident at the amusement park in South Whitehall Township, replicating “a hazardous condition with multiple casualties during the peak of the park’s summer season."

Of course, this is only a training exercise.  Since the Lehigh Valley is the third most-populated region in Pennsylvania (behind Philadelphia and Pittsburgh), most residents would agree that this type of exercise may prove invaluable in the event of a real emergency.  However, the flip side is that it will give FEMA and the Department of Homeland Security one heck of an opportunity to get their ducks in a row for the next major "false flag" operation.  Like a steroid-crazed meathead pumping iron at the gym, FEMA's strength and influence over the lives of average Americans only increases after every one of these super-sized exercises.

Previously, we've followed the FEMA "money trail" and uncovered the possibility that FEMA grants may be used to pay for false-flag events.  For instance, first responders in Sandy Hook received $143,000 from FEMA in 2010, while $102,300 went to emergency responders in Watertown (MA) in 2012- just fourteen months before the shootout that killed Tamerlan Tsarnaev.

It is interesting to note that 1,817 fire and ambulance companies received AFG grants from FEMA so far in 2013.  Of these, 163 were from Pennsylvania- far and away the most of any state.  The vast  majority of these grants (totaling tens of millions of dollars) went to emergency responders in eastern Pennsylvania.  In spite of having just 4% of the United States population, Pennsylvania was awarded 9% of AFG grants.  Not exactly what one might call proportional.

Another interesting thing to consider:

Although Dorney Park doesn't publish attendance figures, the DorneyOnline message board asserts that between 27,000 and 34,000 people attend the park daily during the peak summer season.  A realistic training exercise would require hundreds (if not thousands) of crisis actors.  Where are these actors coming from?

One of the best ways to drum up an army of extras for a project is by posting in the "gigs" section of Craigslist.  However, there are no calls for extras or actors under the Allentown/Lehigh Valley Craigslist listings.  Google and Bing searches for acting gigs in the Lehigh Valley area also failed to produce any results.


Whether or not you believe in conspiracy theories, one thing is certain.  The rough economy and out-of-control government spending hasn't sated the government's appetite for playing disaster games and stockpiling everything from body bags to death certificates.

Recently, FEMA issued a statement announcing that sequestration budget cuts will not impact grant programs.  While the average American struggles to pay bills, the NSA, FBI, FEMA and the Department of Homeland Security continue to spend billions of dollars on curious projects, such as the $2 billion super-secret spy center in Utah, the $1.6 billion stockpiling of ammunition, the purchase of 140 million body bags, and FEMA's order for 200,000 death certificates.

UPDATE:  YOU CAN BECOME A "CRISIS ACTOR"!

Thanks to our helpful readers, we've been informed that around 100 more volunteers are needed for the Dorney Park drill.  According to SouthWhitehallPatch:

Many of the volunteers will be used to simulate bystanders, but the agencies also need volunteers who are willing to play the role of a "victim."

(Caitlin) Stibitz said the "victims" will get wet so they are being advised to wear a bathing suit underneath old clothing. Volunteers must be at least 18 years old to participate.

Those who want to volunteer can contact Stibitz at 610-530-5511 or at stibitzc@cetronia.org.

This is a must-attend event for all conspiracy theorists in Pennsylvania, in order to gain firsthand experience as to how a FEMA mass casualty drill is conducted.