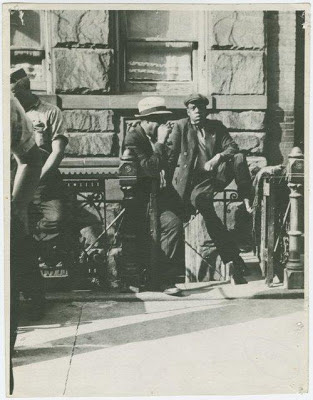 By now, most of our readers have seen the now-famous black and white photograph from 1939 which depicts a man from Harlem who bears an uncanny resemblance to rapper Jay-Z.  The photo created quite a buzz in recent days, after it was discovered by a New York Public Library digital curator.

Naturally, it didn't take long before outlandish explanations and wild theories began to surface.  Some allege that Jay-Z is a vampire who, in reality, is hundreds (and maybe even thousands) of years old.  Some insist that Jay-Z is a member of the Illuminati, owing to the fact that many pop and rap stars were seen sporting Illuminati-themed jewelry and paraphernalia after the 2013 Grammys.  This, of course, may simply be the latest of any number of flamboyant fashion trends rooted in urban subculture. 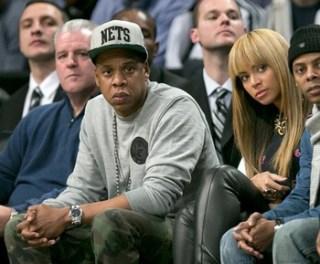 However, one explanation put forward by Inquisitr really takes the cake:

The most plausible theory is that Jay-Z is a time traveler. The singer recently wrote several songs for the movie The Great Gatsby and may have wanted to travel back to 1920s New York to get some inspiration.

We'd like to offer what we believe is a much more plausible theory than ones previously offered.  Our theory is that, quite simply, the world has run out of faces.

The Jay-Z doppelganger photo is just the latest to make the rounds through Cyberspace.  The same vampire and time traveler theories abounded when similar old-time photos emerged bearing striking resemblances to Nicholas Cage and John Travolta. 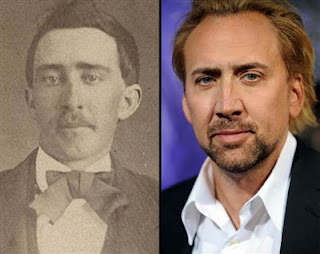 The question of whether or not it's possible for mankind to exhaust its supply of unique faces is a lot like trying to find out if two snowflakes can be identical.  The answer, of course, depends on what one would consider "identical".  If we are talking about an exact duplicate, the answer would  probably be "no", since very few things in the natural world are exactly alike.  Even identical twins have unique fingerprints, after all. 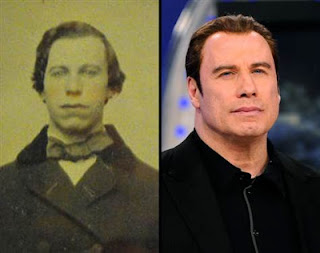 But, in the case of the aforementioned celebrity doppelgangers, it's highly unlikely that Jay-Z, Nicholas Cage, and John Travolta are exact replicas of a 19th or early 20th century original.  In fact, this is impossible to determine.  What we have is a matter of coincidental resemblance.  The reason it catches our attention is because we are seeing doppelgangers of famous folks rather than ordinary Joes.  There's a very good chance that any face which appears in an old time photograph might very closely match the face of someone currently living.

Now, let's go back to snowflakes for a moment.

Scientists believe that some simple hexagonal prism snowflakes can be exactly identical, because there are only so many different ways to arrange water molecules.  According to CalTech.edu:

An exception... would be a snow crystal with only a handful of molecules.  If we assemble a crystal of only 10 molecules, for example, then it's not so unlikely that each of the 10 will contain two ordinary hydrogen atoms and one ordinary 16O atom.  Furthermore, a cluster of only 10 molecules will only have a few likely configurations.  So there's a reasonable probability that two 10-molecule snow crystals would be exactly alike.

Therefore, logic dictates that the more complex the snowflake, the less chance there is of that snowflake having an exact duplicate.  As a result, out of all the snowflakes made over the entire history of the universe, it's probable that no two complex snowflakes have ever looked exactly alike.  But "exactly" is the key word here.  Even the most complex snowflake might have hundreds of thousands of brethren that are perhaps 95% alike, or 98% alike.  In other words, to the untrained eye, these snowflakes might appear to be identical.  Theoretically, the same logic should apply to faces.

All human beings can trace their family trees back to a surprisingly small group of common ancestors.  According to anthropologists, your number of ancestors doubles every 25 years the further you go back in time.  For example, if you have four grandparents that were born in 1950, you probably had eight great-grandparents in 1925.  This is an approximation, of course, based on the anthropological assumption that the "time span" between generations is 25 years.  Based on that mathematical assumption, 1000 years ago you should have had over 500 billion ancestors alive during a single generation.  Since the current population of the world is around 7 billion, that's impossible.  The bottom line is that, for better or worse, we are all inbred.

Surprisingly, our pool of common ancestors is extraordinarily small.  This, of course, means that genetic material is passed down the line and, if that line continues for long enough, you're sure to run out of "unique" facial features.  After all, there are only so many different shapes of noses or chins or eyes, and only a limited number of ways they can be arranged on a face.

So, just as is the case with complex snowflakes, while there will never be two faces that are truly 100% identical, there are thousands upon thousands of faces that probably are so similar in appearance that they would appear to be "dead ringers" in photographs.


Interested in time travel?  Check out these JOTB Staff Picks: