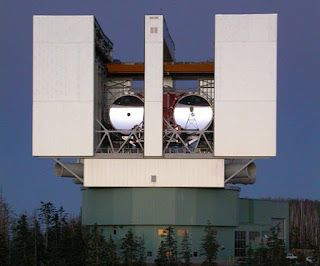 Authors of a new book claim that Vatican astronomers are keeping their eyes open for an alien savior, with the help of a highly-sophisticated instrument known as LUCIFER, which is an acronym for "Large Binocular Telescope Near-infrared Utility with Camera and Integral Field Unit for Extragalactic Research".  This apparatus is located on Mt. Graham in southeastern Arizona and is attached to a telescope owned by the University of Arizona.

Tom Horn and Chris Putnam are the authors of Exo-Vaticana: Petrus Romanus, Project LUCIFER, and the Vatican’s astonishing plan for the arrival of an alien savior.  The book's authors claim that they have obtained documents which states that the Vatican believes that we are soon to be visited by an "alien savior" from another planet.

The book relies heavily on statements made by Guy Consolmagno, a planetary scientist at the Vatican Observatory.  In a 2010 interview, Consolmagno told The Guardian that he would be willing to baptize an extraterrestrial being if the opportunity presented itself.  He also stated that, “Any entity – no matter how many tentacles it has – has a soul.”

The Vatican's stance on alien life is mirrored by other religions, many of which also appear to be making preparations for contact with extraterrestrials.  Speaking at the University of Portland in Oregon on May 9, 2013, the Dalai Lama addressed the issue of alien contact, stating that he would like to greet them and shake their hands, adding that visitors from other galaxies are the same as us.

It is interesting to note that the name Lucifer means "bearer of light"- and the LUCIFER telescope works by using two 8.4 m (27 ft) wide mirrors to gather light.