The evolution of the FEMA logo


In 2003, FEMA- an agency under the direction of the Department of Homeland Security- changed its logo.  Many people believe this was done because the old logo (pictured above)contained "occult" symbology.
The old logo, an adaptation of the Great Seal of the United States, was chosen to represent vigilance and preparedness.  The eagle is holding a banner proclaiming PACE AC BELLO MERITA, which means "Service in Peace and War," which alludes to the agency's responsibility in all types of natural and man-made emergencies.  However, it is the symbol which appeared over the head of the eagle which startled some people; a triangle (pyramid) surrounded by a circle.

This symbol has been a popular occult symbol since ancient times.  In Satanism, the triangle inside the circle is known as the Thaumaturgic Circle.  It is commonly used in demon- conjuring and spellcasting ceremonies, since the triangle represents the doorway to the spirit realm, and the circle symbolizes the boundary of power. 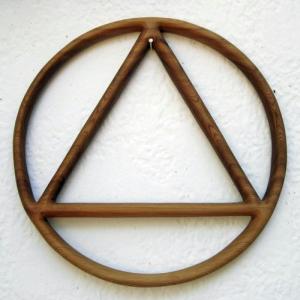 The triangle surrounded by a circle has also become a popular symbol associated with Freemasonry.  Freemasons refer to this symbol as the "symbol of the Kybalion".  The Kybalion, a book published in 1908, was said to contain the teachings of Hermes Trismegistus,  author of the Hermetic Corpus, a series of sacred texts that form the basis of Hermeticism.

Perhaps most interesting is the fact that, in the old FEMA logo, the thaumaturgic circle appears above the eagle.  This fact has not been overlooked by conspiracy theorists, who interpret this to mean that FEMA (and the Department of Homeland Security in general) operate at a level above the federal government.  This might explain the Dept. of Homeland Security's extensive track record of violating the Constitution and Bill of Rights.  One such example of this is the NDAA, or National Defense Authorization Act.  Signed by the President Obama on New Year's Eve in 2012, this highly-controversial bill suspends civil and constitutional rights of American citizens.  Under Title X, Subtitle D of the NDAA is Section 1021, which legalizes martial law in the United States.  This provision allows the United States military, FEMA and Homeland Security to act as a police force, giving them the right to  arrest, indefinitely detain, and use deadly force against any person suspected of terrorism- all without a court trial.

However, there's a more practical reason why this symbol appears on the old FEMA logo.  The forerunner of FEMA was the Federal Civil Defense Administration (FCDA), which was organized by president Harry S. Truman (1884–1972) on December 1, 1950.  The FCDA seal featured a white triangle inside of a dark blue circle- the same symbol found in the old FEMA logo. 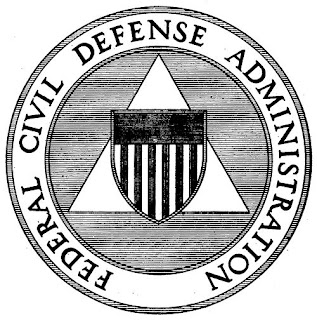 Truman probably chose the symbol because he was, of course, a Freemason.  Truman was initiated on February 9, 1909 into the Belton Lodge in Missouri.  In 1911, he helped establish the Grandview Lodge and served as its first Worshipful Master.  During his Senate re-election campaign in 1940, Truman was elected Grand Master of the Missouri Grand Lodge of Freemasonry, and Truman later bragged that his Masonic ties assured his victory in the  Senate election.  He was made a 33° Sovereign Grand Inspector General and an Honorary Member of the supreme council in 1945.

In all likelihood, the designer of the FEMA logo was probably trying to pay homage to the agency's forerunner, the FCDA.