The Origin of Bigfoot: Offspring of Apes and Indians? 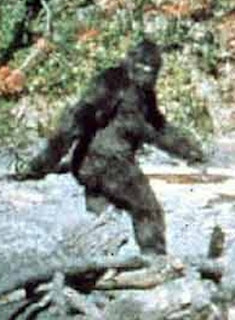 Most Bigfoot researchers are aware of the fact that the word sasquatch was coined by a Canadian schoolteacher, J.W. Burns, in the 1920s, and that the earliest known "evidence" of Bigfoot was found in 1811, when a trader named David Thompson discovered strange 14-inch-long footprints in Alberta.  However, very few Bigfoot researchers are aware of a 1904 newspaper article which offers an even older explanation for the famed ape-like creature's appearance in North America.

On July 8, 1904, the Walla Walla Evening Statesman printed an article about a Bigfoot-like creature spotted in British Columbia by Mike King.  King was a friend of the Indians, and sought an explanation for the ape-like humanoid creature.  The explanation given to King by the Indians contrasts sharply with the traditional native folklore most of us are familiar with.

According to King, the local tribes claimed that the history of the North American Bigfoot dates back to the days of Spanish occupation of Nootka Sound, on the west coast of British Columbia's Vancouver Island.  The 1904 newspaper article states:

Mr. King has brought the matter up time and again in his talks with the Indians, whose confidence he enjoys.  Bit by bit he has patched together their theory and tribal tradition, by which it appears that they credit the coming of the original wild wan to the days of the Spanish occupation of certain of the west coast ports.

At one of these, Nootka, it is alleged an immense hairy creature, either baboon or ape, escaped from one of the ships and, after terrorizing the aboriginal inhabitants, proceeded to make itself at home in the forest.  Thence it is alleged to have issued upon one occasion and seized an Indian girl, with whom it set up housekeeping.  The wild man seen by Mr. King is believed by the Indians to have been the offspring.

The historical record does seem to support the origin of Bigfoot as described by these Indians.  The Spanish Navy arrived at Nootka Sound in 1774, and in 1789 a Spanish settlement was founded by Esteban Jose Martinez at Friendly Cove.  Martinez named the colony Santa Cruz de Nuca.

Mike King, an uneducated man who worked as a lumberjack, probably could not have invented such a story himself about the historical origin of Bigfoot.  The Walla Walla Evening Statesman vouched for King's reputation, implying that a man who never drank alcohol and who spent three-quarters of his life in the woods was not "apt to see things in the woods not actually existent".

This, of course, begs the question "can humans and primates interbreed?"

While many scoff at this idea, some leading scientists argue that humans and primates are indeed capable of interbreeding, thus producing a "humanzee" hybrid.

One such scientist is Dr. Calum MacKellar, director of research at the Scottish Council on Human Bioethics.  In 2008, MacKellar became an outspoken critic of Scotland's Human Fertilisation and Embryology Bill, warning that an ape/human hybrid could become a reality unless the government took action.  In 1987, a dean of anthropology from Florence University, Brunetto Chiarelli, claimed that an experiment did succeed in producing a viable "humanzee" zygote but, for ethical reasons, the specimen was destroyed.

But, what if one of the parents had a missing or extra chromosome?  This is certainly possible.  Klinefelter's syndrome is a genetic disorder in which there is an extra X chromosome to the standard human male karyotype, for a total of 47 chromosomes.  Aneuploidy- the term for an abnormal number of chromosomes- occurs in 1 in 160 live births.  In other words, it's not all that uncommon.

Obsessed with Bigfoot?  Check out our JOTB Staff Picks: