Chances are, you're not standing on a corpse. 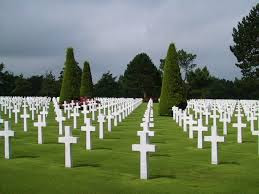 How many people have ever lived on Earth? 108 Billion, at least according to the Population Reference Bureau.  Our planet contains roughly 57.5 million square miles of land.  Is this enough space to bury the bodies of every human being who has ever lived?  The answer is... yes (and a resounding yes at that).

The average casket measures 84 inches in length and 28 inches in width, which means that the minimal amount of space needed to bury a human being is 2,352 square inches, or approximately 16.3 square feet (16.33333 to be more precise, but for the sake of argument, let's round it off).  One square mile of land is equal to 27,878,400 square feet.  Based on this math, one square mile of land can hold the bodies of 1,707,189 dead people... providing that there is no space between the burials, of course.

This means that the Earth can hold the bodies of 98,264,372,500,000 dead people, laid end to end and side by side.  Considering that only 108,000,000,000 human beings have ever lived since the beginning of time, it's safe to say that you are probably not standing on top of someone's long dead and long-forgotten corpse.  In fact, if you took every human who has ever lived and multiplied that number by a staggering 900, you would still have plenty of land left on Earth to walk upon without fear of walking on top of a corpse.

What would happen if every single person alive in America died right now?  How much space would it take to bury the dead?

The bottom line is that although it often seems like we're living on a crowded planet, in reality we are not.  And if you've ever wondered if Earth was in any danger of running out of burial space, the answer is that we haven't even come close.