Hollow Earth, Underground Civilizations, and the Tower of Babel 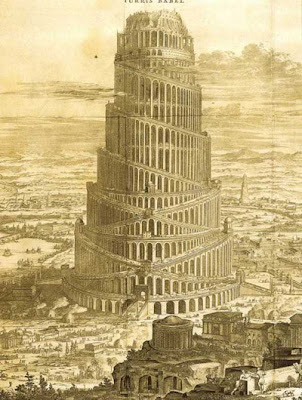 Since the beginning of civilization, mankind has been intrigued by the idea that the Earth is hollow, and that numerous "lost" tribes and races may inhabit vast continents beneath the planet's surface.  Some Buddhists call this "lost civilization" Agharta, while other cultures have similar legends.  Others believe that the inner Earth is inhabited by reptilians, Atlanteans, aliens, and all things in between.  One of the most famous names surrounding the hollow Earth theory is Olaf Jensen, a Norwegian sailor who claimed to have sailed a ship through an opening at the North Pole.  The story of Olaf Jensen was written by Willis Emerson, in a "biography" of the Norwegian sailor entitled Secrets of the Subterranean Cities.  For two years, wrote Emerson, the sailor lived with the 12 foot tall inhabitants of Agharta.

One of the forgotten proponents of the hollow Earth theory is Hesikia Thomas, an eccentric hermit who claimed that he could turn pebbles into gold and believed that a cave on a tiny island in Michigan's Corey Lake led to the Underworld.

In 1911, a group of boys from a YMCA summer camp were digging a hole for a flag pole on the grounds of Camp Eberhart when they unearthed a rusty large iron box containing the life story of an eccentric, but forgotten, hermit named Hesikia Thomas.  The hermit also buried  two rusted pistols, a plain gold ring, a silver pocket watch and several leather-bound books inside the box, the oldest dating back to 1767.  The books were of a religious nature, and included a Bible, a few hymnals, and some school books.  The hermit's chest also contained a cache of pennies minted between 1781 and 1854.  The strange collection also featured an assortment of smooth pebbles, arrowheads, and a deed to property in Connecticut, dated 1739.
As interesting as these rusted relics and trinkets may have been, they weren't as interesting as the faded letters written by Thomas.  One of the letters read:

This chest is the property of Hesikia Thomas, formerly of New England, later of the Michigan wilderness, a spiritualist of God, believing my spirit still roams over the lakes in the full moon seasons, guarding all my valuable deposited possessions, for they are many and varied.  God gave me many wonderful secrets, but because of the great sin He took them all away but one- the least of them- the turning of sable stones into gold.

I have buried this secret by the body of old Duckwing in the big swamp.  God rest my soul.  God has filled the Earth with gold.  Devils do not believe it, but has He not promised 'seek and find'?  The blue heron is wise and the night owl, but man is an ass, for he walketh not in the ways of the Most High.

The name Hesikia Thomas didn't resonate with any of the campers, but it was a name remembered by George Knevels, who lived near the camp in a house that had been originally built by the hermit.  As a boy, he remembered finding carefully hidden piles of pebbles throughout the family home.  Nobody in the family could think of any possible reason why the previous tenant had hidden the pebbles, and it wasn't until the hermit's note was found that it made sense to Mr. Knevels: The kooky old hermit actually believed that he had the ability to turn pebbles into gold.

Hesikia later sold his home and took up residence on an island in the lake, Coop's Island, which he referred to in another one of his letters as the "abode of the seven devils".  The hermit stated that he had hidden two other chests, one of which was supposedly buried on the island.  For weeks, the entire neighborhood descended upon the island in the lake, in the hopes of finding more of the hermit's treasure.  The hermit described the perils of the island in one of his letters:

The island is doomed forever as it is the abiding place of the seven devils.  Beware; fish die, birds drops as they pass, and man disappears in the cavernous depths of the cave.

It wasn't until 1933 when a treasure hunter named Jacob Leitsof uncovered the second box hidden inside a hollow of a tree near the shoreline of the lake.  This box, much smaller than the one found in 1911, contained Hesikia Thomas' journal, which was apparently written during his time on Coop's Island.

According to the hermit's diary, he was awakened one night by strange tremblings which rattled the earth and rippled the waters of the lake.  He awoke just in time to see a 10 foot tall man of slender build, with long white hair and wearing a toga-like gown disappear into the cave.  For three nights he sat outside the mouth of the cave, waiting for the strange man to return.

On the third night, Hesikia claimed to have made contact with the man, who spoke to him in a foreign tongue.  By way of a bronze-colored piece of metal which the tall stranger instructed the hermit to place inside his ear, the tall stranger's odd language was translated.

Hesikia wrote that the man identified himself as Nazret, who lived on one of the seven subterranean continents.  The strange tremors, explained Nazret, were the result of a violent war raging beneath the planet's surface.  The hermit's journal stated:

The land below is as doomed as the land above.  The Underworld is home to seven mighty tribes, controlled by seven powerful devils, who are constantly at war amongst themselves.  Nazret revealed unto me many secrets of the Underworld and, in return, I revealed unto him my process of turning sable stones to pure gold.

The hermit then wrote that Nazret explained that it wasn't God who had shown the old man the secret of transmutation, but a messenger from Nazret's own kingdom, which he referred to as Shinar.  The hermit then learned that the underworld civilization first reached the Earth's surface tens of thousands of years earlier by climbing an enormous tower.

This tower- the legendary Tower of Babel- was constructed so that Shinarians could flee the underworld during times of war.  In wartime, they lived on the surface and interbred with the native tribes of North America.  Nazret explained that the Tower of Babel was destroyed by an enemy tribe led by a giant named Magog, whose soldiers leveled the tower with a powerful explosive, which Nazret refused to explain to the hermit, fearing that the simple formula which had wrought so much destruction in the Underworld might do the same on the Earth's surface.

Although the tower had been destroyed eons earlier, Nazret explained that the Shinarians had long since developed a type of flying machine that could ferry them to one of the many openings on the planet's surface.  Hesikia claimed that Nazret then disappeared into the bowels of the Earth, promising to return after a century had elapsed.

Hesikia Thomas didn't die on the isle of the seven devils.  The older citizens of Three Rivers, Michigan, recalled that his body had been found in the woods, not long after he had sold his house.  It was determined that had frozen to death and he was later buried in a pauper's grave, its location now forgotten, along with the hermit's third box, which to this day has never been discovered.

Was the old hermit who believed that he could turn pebbles into gold crazy?  Or could he have stumbled upon one of the entrances to the Underworld?  It is perhaps interesting to note that over a century has elapsed since "Nazret" last appeared, and Michigan is once again experiencing strange tremblings and rumblings beneath the Earth.

It is also interesting to note that many people claim that there is an underwater UFO base beneath Lake Michigan- the shores of which are only about fifty miles away from the spot where Hesikia Thomas buried his "treasure chests".