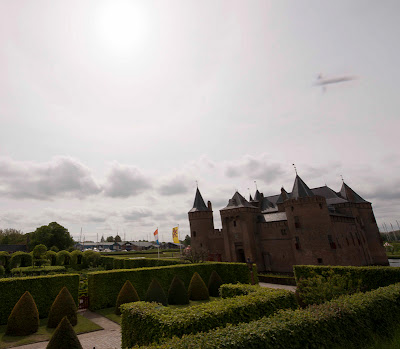 On May 25, Corinne Federer visited a medieval castle near Amsterdam with her mother. Federer, an amateur photographer, was shooting High Dynamic Range (HDR) photos of the Muiderslot castle, and later noticed an anomaly which has many UFO experts salivating.  Federer captured an object which resembles a rod-shaped object with S-shaped wings, traveling at a high rate of speed.

In an interview with the Huffington Post, Federer explained:

"In order to create HDR images, you take three or more exposures -- this one happened to be five -- and you shoot them all at the same time, because you then overlap the images and it gives you the full spectrum of light, which your camera can't capture but your eyes can".

Huffington Post sought out the opinion of Ben Hansen, a former FBI agent who specializes in photo analysis.  Hansen, who hosts "Fact or Faked: Paranormal Files" on the Syfy Channel, has concluded that no photographic trickery or sleight-of-hand took place:

"Having reviewed the raw files, there's no overt indication that the photos have been manipulated with post editing software," Hansen told the Huffington Post.

"The object's appearance is internally consistent with the rest of the photo. For instance, look at the darker area of the underside of the object compared with the clouds. The shadowing is similar on the underside as well as the lighting on the top of the object and the clouds where the sun is brightest. Having the sun in the frame is helpful because it indicates where shadows should appear. This further supports that the object was photographed 'in-camera' and not added later."

Although Hansen vouches for the authenticity of the picture, he believed that the photographer might have captured an insect whizzing through the air.  Nonetheless, Hansen's conclusion that the photo is authentic has made the Netherlands UFO a trending topic on Google and Yahoo, which now display dozens of articles claiming "FBI agent states Netherlands UFO is real".  Of course, since the object in question hasn't been positively identified, this is not an untrue statement- though it is a horribly misleading one.

Ms. Federer's photographs shown an object which is consistent with "flying rods", which Paranormal-Encyclopedia.com defines as:  a phenomena in which mysterious rod-shaped objects appear in video footage or photographs. Some people believe these rods to be an unknown form of life, perhaps extraterrestrial in origin.  Skeptics believe most flying rods are actually insects or small birds that only appear to have the mysterious rod shape because they are blurred by photographic exposure time.

It is the opinion of JOTB that the flying rod captured by Ms. Federer is, in all likelihood, an insect and not a traveler from another galaxy (for a terrific explanation of insect "flying rods", this article explains the phenomenon very clearly).

As you can see by the following pictures of insects captured in flight, the wings of the insect are responsible for the S-shaped fins of the Netherlands UFO.  These "insectarods" sometimes appear as having two or more, or sometimes even dozens, of pairs of wings, depending on the exposure time of the camera. 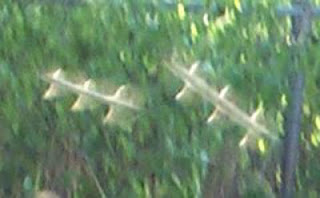 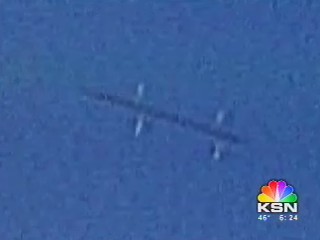 If the UFO seen over Muiderslot Castle had been some kind of extraterrestrial spacecraft, surely it would have been seen by others.  Muiderslot is one of the most popular tourist attractions in the Netherlands.  A museum exists inside the castle, and there are numerous hiking and walking trails on the grounds.  Thousands of residents live in the Muiden, with thousands more as visitors and tourists, and Amsterdam- with a population of over two million- is only about ten miles away.

The fact that this object was described as being too fast to see for the human eye points to an insect.  The fastest flying insect, the male horsefly, can attain speeds of 90 mph and appears as a "flying rod" when captured in a photograph.  Therefore, if the mystery object is the same size as an insect or a bird, it would have to be flying a similar speed in order to provide the same photographic effect.

Likewise, since an alien spacecraft probably travels a lot faster than 90 mph and probably flies at a much higher altitude, it would need to be traveling tens of thousands of miles per hour in order to prove the same photographic footprint as an "insectarod".  This wouldn't be a problem in the depths of outer space, but you can clearly see that the Muiderslot Castle UFO isn't flying above the Earth's troposphere.

In other words, a UFO traveling at a speed "too fast to be seen by the human eye" would have to be flying at an altitude above the Earth's exosphere (approximately 372.8 miles above the surface) or else it would be burned to a crisp upon entering the Earth's atmosphere!

The UFO in the picture is obviously not flying 372.8 miles above the ground, therefore it can only be an insect or a bird.  Since no one else saw the object on account of it being too fast for the human eye, this rules out the possibility of a bird, which leaves us with an insect.