The Ghostly Shadows of Hiroshima

on June 26, 2013
Exploring the Link Between Radiation and Ghost Photographs

The atomic bombing of Hiroshima in August of 1945 is an event which will be remembered for as long as mankind inhabits the earth.  It is an eternal reminder of the horror of war; a reminder so profound that the very name of the city is synonymous with nuclear warfare.  The force of the explosion was so great that shadows became permanently etched into walls and other surfaces.

Since thermal radiation travels in a straight line, a shadow is created when the radiation is blocked by a solid object.  In the case of atomic explosions, the shockwaves generated by the X-ray-heated air can create a permanent "negative" image on walls, streets, and other solid structures.  Several of these shadows can still be seen today around Hiroshima and Nagasaki.

Interestingly, this phenomenon isn't limited only to atomic blasts.

Throughout history, there have been numerous reports of ghost-like images "etched" into glass window panes after powerful lightning strikes.  Take, for instance, the strange case of Mrs. Garth, whose likeness was captured in a pane of glass and could be seen for more than twenty years after her death.

In 1875, the discovery of this ghostly image was made by a woman who was washing clothes in a yard in Albemarle County, Virginia.  She thought that someone was watching her through the window and went inside the house to see who it was.  Jesse Garth, the owner of the house, was surprised to discover that the phantom image was that of his wife, Elizabeth, who had died twenty years earlier.  Mr. Garth recalled that one night, as his wife was standing by an upstairs window during a storm, she was stunned by a sudden flash of lightning.  A Dr. Brown investigated the image which appeared on a pane of glass in the upper sash of one of the windows and noticed that it was very similar in appearance to a photographic negative.  He theorized that the outline of Mrs. Garth's features were created by the lightning blast.  The oldest daughter of Mrs. Garth stated that the image was most distinct around 9 o'clock in the morning and 3 o'clock in the afternoon.

Although the production of X-rays by lightning has been theorized since 1925, it wasn't until 2001 that researchers from the New Mexico Institute of Mining and Technology were able to find conclusive evidence of X-ray emissions from lightning.  Similar evidence was uncovered by the University of Florida that same year.

This discovery should be of particular interest to paranormal researchers who investigate ghost photography.  Many "authentic" ghost pictures (photos not staged or manipulated by editing software) feature spooky images which appear on windows, television screens, panes of glass in picture frames, and other glass surfaces.  Could it be possible that these apparitions are nothing more than "etchings" rendered by powerful lightning strikes?

As evidenced by the case of Mrs. Garth, her image made its most distinct "appearance" at certain times of the day, probably when the sun was shining at just the right angle.  To those who are unfamiliar with the photographic etching abilities of X-ray emissions from lightning strikes (which would be virtually 100% of us prior to 2001), her ghostly likeness appearing at certain times of day on a window pane could easily be viewed as a paranormal or supernatural phenomenon. 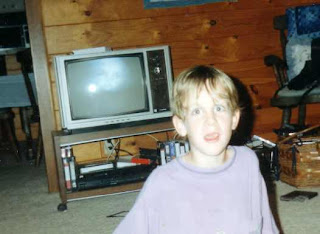 This may also explain why "ghosts" seen in window panes are more detailed than the ghostly shadows on the walls and streets Hiroshima; unlike cement or concrete, glass is highly refractive.  This is why the first photographic plates were made from glass coated with silver salts.