The Man Who Turned to Stone 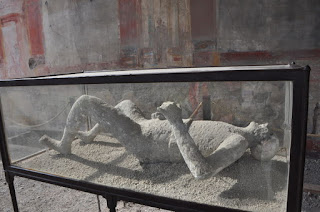 In 1888, grave diggers in Augusta, Georgia exhumed a corpse which had been buried just four years earlier.  Much to their surprise, the deceased had become inexplicably petrified.  Here's one newspaper account of the bizarre transformation:

A most singular discovery has been made in the Augusta, Georgia cemetery.  In accordance with instructions received from members of the family, the remains of S.O. Gillette were exhumed by Cemetery Superintendent Bryan and interred in a different section.  When the grave diggers had uncovered the coffin and went to remove it from the grave it was found that two men could not budge it.

Usually after a body has lain in the ground for several years it becomes very light, but it took six men to lift this one from the grave.  The singular fact induced Superintendent Bryan to investigate into the cause, and it was found that the body was completely petrified, and was as hard and solid and heavy as a rock.  It was in a wooden coffin, and the top had decayed so that the glass had fallen in on the face.  The weight of the glass had somewhat disfigured the nose, but with this exception and the sunken appearance of the eyes, the face presented its familiar appearance.  When buried, however, the face was clean shaven, and when looked at Friday it was covered with a beard several inches long.  The face was dark and presented the appearance of iron, looking not unlike a metal cast.

Superintendent Bryan and those present, after making the examination, proceeded to bury the remains in the new lot, but the story leaked out Friday evening, and Undertaker Platt and others will make an effort to get the consent of the family to again exhume the body for the purpose of making a critical and scientific examination.  The remains were buried less than four years ago, and the short time in which petrification has occurred makes it a remarkable and unusual case.

(from the Somerset Herald, May 9, 1888)
death Strange History