A Baby With a Man's Head? 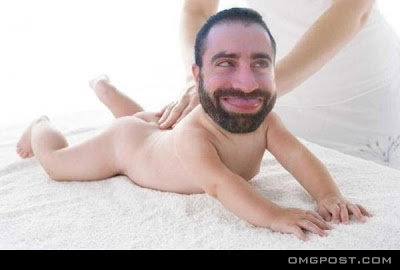 Not all of our article are the result of planning; sometimes we stumble across a great story completely by chance, such as this strange story about a "man baby" from Kansas.  While researching background information for an unrelated story, we came across this rather odd article which appeared in the August 3, 1889, edition of the St. Martinville Weekly Messenger:

There has just been discovered in the south part of this (Dickinson) county, writes a Kansas correspondent of the Globe-Democrat, one of the most remarkable monstrosities of the human family ever known to exist in this section.  It is a child-man, or rather a child's body with a man's head.

A few days ago a prominent physician was making a call on the family in which the monstrosity lives, and while talking with his patient he noticed an object in a cradle at the opposite end of the room.  It was carefully covered up, but he thought he perceived a beard showing from beneath the covering.  He could get no opportunity for a more careful examination at the time, but in order to investigate further, informed his patient that other calls would be necessary.  Upon a subsequent visit he managed to be left alone in the room with the cradle and its mysterious occupant.

Hastily pulling off the covering there was discovered a sight which made his heart cease for the moment to beat.  It was nothing less than a man's head joined to an infant's body.  The large eyes blinked at him, and the lips, bearded and mustached, made inarticulate sounds, but no gleam of recognition or intelligence was observable in the being's face.  Determined to investigate the matter more fully, the physician called the man and woman of the house, and demanded an explanation of the sight which had met his gaze.  At first they were angry that he had pried into the secret that they had guarded so well, but at last, seeing that further concealment was impossible, they made a clean breast of the affair and told the following story:

Nearly thirty years ago a man named Reed moved into Kansas from Illinois.  His family consisted of himself, wife and one daughter.  The latter was about seventeen years old and rather good-looking.  They settled near the junction of the Republican and Smoky Kill Rivers, in the vicinity of what is now Junction City, and the daughter married a trapper.  Her first child was a boy, and she died in giving it birth.  And older sister had come on from the East by this time, and she took the motherless little one into her family.  Its father was killed during the border troubles, and she practically adopted the orphan.

The child grew and thrived normally until it was about four years and six months old, when it seemed to cease developing.  Soon it was noticed that development had not been arrested in all parts of the body.  The head kept on growing as if it belonged to the sturdiest child in the state.  Year after year this strange growth went on, and still there was no change in the infantile body or limbs, though the head continued its growth.  The sister and her husband moved into Dickinson County, where they have since resided, and took the child with them.  The grandparents are dead and the monstrosity has reached the age of twenty-nine years.

Its head is as large as that of an average-sized man, and is crowned with a heavy growth of coarse brown hair.  Heavy beard and mustache are on its face, and lines of maturity show upon the cheeks are forehead.  The body remains, from the neck down, that of a four-year-old child.  The child, or man, cannot sit up as the monstrous head is too heavy for the muscles of the trunk to lift.  It lies in the cradle helpless and watches with a brute-like gaze the doings of those around.

(This is a condensation of the original newspaper article from 1889.  Read the full article here)
freaks human oddities Strange History