Can Palm Surgery Alter Your Future? 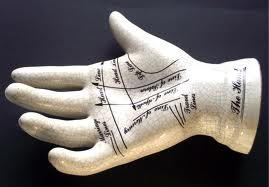 Millions of people believe that the lines of one's palm determine everything from a person's wealth and marital bliss to even one's lifespan.  But what if your palm reveals nothing but disaster and heartbreak?  Luckily, there's now surgery to correct that problem.

Dr. Takaaki Matsuoka is the man behind palmistry plastic surgery, in which an electric scalpel is used to alter the lines of the palm.  By extending the love line and money line on one's palm, proponents of palmistry surgery believe that better luck will follow.

According to a recent story published by YourJewishNews, the surgical procedure, which takes between 10 and 15 minutes to complete, costs in the neighborhood of $1,100.  According to Dr. Matsuoka, the wounds on the palm take about a month to heal.

Already, recipients of palmistry surgery are reporting terrific returns for their investment.  One woman with a history of bad luck in love reportedly married shortly after her surgery.  Two others allegedly won the lottery after having the money lines on their palms extended.