I Demand Satisfaction! A Guide to Dueling Etiquette 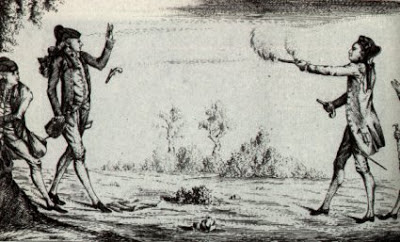 Haven't you ever longed for the good old days when you could settle your differences by challenging someone to a duel?  While many of us have longed to "demand satisfaction" from an offending party, few of us are probably aware of the proper etiquette involved in a duel.  A duel is not a primitive and macho expression of anger, but a highly-choreographed waltz between two gentlemen.  In 1833, former governor of South Carolina John Lyde Wilson published a 22-page booklet on the fine art of the duel.  While space prevents us from describing every rule pertaining to this lost art, here is a brief guide to proper dueling etiquette (based on Wilson's rules), should you ever find yourself in a situation which "demands satisfaction".

1. Unlike in the movies, a duel is never requested in the presence of the offending party.  The offended party is supposed to return home and enlist the aid of a close personal friend to act as a second.  The second is required to make an attempt to talk the offended party out of taking action.  But, if this "talking down" fails, it is the duty of the second to present a letter of challenge to the offender on behalf of the aggrieved party.

3.  It is the duty of the seconds to agree upon the date, time, weapons, and conditions.

4. The principals (those who are dueling), seconds, one surgeon and one assistant surgeon to each principal are the only persons permitted on the dueling grounds.

5. The arms used should be smooth-bore pistols not exceeding nine inches in length.  The use of rifled barrels is strictly prohibited and the violation of this rule would be most "ungentlemanlike".

6. The proper distance between the principals is between 10 and 20 paces, with each pace consisting of a distance of three feet.

7. Wilson states: Each second informs the other when he is about to load, and invites his presence, but the seconds rarely attend on such invitation, as gentlemen may be safely trusted in the matter.  The second, in presenting the pistol to his friend, should never put it in his pistol hand, but should place it in the other, which is grasped midway the barrel, with muzzle pointing in the contrary way to that which he is to fire, informing him that his pistol is loaded and ready for use. Before the word is given, the principal grasps the butt firmly in his pistol hand, and brings it round, with the muzzle downward, to the fighting position.

8. If a principal fires before the agreed upon word or time, the second principal is at liberty to fire back.

9. If neither party is hit, the duel is over.  Once a principal has been hit, the duel is over- regardless of whether or not the wound is life-threatening.   If neither party is hit, it is the duty of the second of the challengee to approach the second of the challenger and ask: “Our friends have exchanged shots, are you satisfied, or is there any cause why the contest should be continued?”

10. If the challenger is willing to let bygones be bygones, his second should reply: “The point of honor being settled, there can, I conceive, be no objection to a reconciliation, and I propose that our principals meet on middle ground, shake hands, and be friends.” If this be acceded to by the second of the challengee, the second of the party challenging, replies with: “We have agreed that the present duel shall cease, the honor of each of you is preserved, and you will meet on middle ground, shake hands and be reconciled.”

Now that you know the proper etiquette for dueling, you will never have to worry about feeling "ungentlemanlike" when responding to someone's demand for satisfaction!