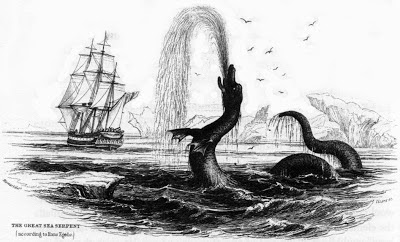 Historical newspapers provide numerous accounts of sightings of strange creatures of the land, sky, and sea-- some more reliable than others.  The following article, which appeared in the Nov. 23, 1901 edition of the Akron Daily Democrat, is worth mentioning because (to the best of our knowledge) it was the first, last, and only time that a sighting of a sea serpent was officially verified by the U.S. government.

Washington, Nov. 23.-- Our old tried and true friend, the sea serpent, has bobbed up again.  There can be no shadow of doubt of his existence now for Uncle Sam himself stands sponsor for him.  In an official report backed by all the official proofs in the way of signatures that can be asked for, the Hydrographic Bureau described his snakeship.  The following is the report made by Henry H. Neligan, third officer of the steamship Irade, regular observer for the bureau, dated Oct. 26:

"At 11 a.m. today in latitude 27 degrees, 26 minutes north and longitude 90 degrees 18 minutes west, passed a large sea serpent appearing about 100 feet long.  The head had a blunt square nose and was ejecting water to a height of two or three feet from its nostrils.  The animal or fish had three distinct sets of fins and a tail lying across, like a porpoise.  On its back was a series of humps, like a camel.  It was heading about east (true) and moving slowly."

The part of the ocean specified is the Gulf of Mexico.  The word "true" within the parenthesis is not meant to be applied to the veracity of the story, but indicates that the direction taken by the monster was "true east" instead of the mariner's east, as measured by the magnetic compass.