Mark of the Beast: Is the government planning to make us glow in the dark? 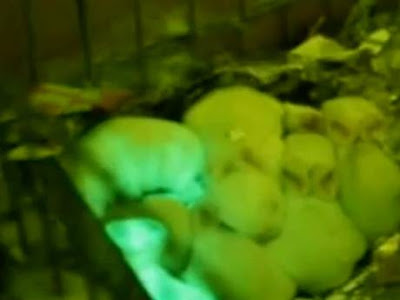 Ever since a team of Uruguayan scientists produced a glow-in-the-dark sheep earlier this year, scientists around the world have been injecting fluorescent jellyfish proteins into virtually every critter that walks, swims, barks, or quacks.  Earlier this week, researchers announced that they have successfully created cloned glow-in-the-dark rabbits.

The latest researchers involved in producing glowing animals are from the University of Hawaii's Institute for Biogenesis Research, and have produced a litter of eight rabbits, two of which glow bright green in the dark.  Dr. Stefan Moisyadi, a biogenesis researcher from Hawaii's Institute for Biogenesis Research, claims that the rabbits are not affected by the fluorescent protein and will have the same life expectancy and regular non-glowing rabbits.  "And on top of it, their fur is beginning to grow and the greenness is shining right through their fur. It’s so intense,” added Dr. Moisyadi.

According to the scientists involved in these experiments, the plan is to eventually introduce "beneficial" genes into larger animals, in the hopes of creating less expensive medicines.  “Sheep, cows, and even pigs,” Dr. Moisyadi said to KHON2.com. “The benefits in doing it in large animals is to create bio-reactors that basically produce pharmaceuticals that can be made a lot cheaper.”

"[For] patients who suffer from hemophilia and they need the blood clotting enzymes in their blood, we can make those enzymes a lot cheaper in animals with barrier reactives rather than a factory that will cost billions of dollars to build," stated Dr. Moisyadi.

But is the goal really to produce cheaper medicine, or is this part of a more nefarious plot, such as a plan to brand certain humans with the "mark of the beast"?

According to the Institute for Biogenesis Research's website, the institute holds more than $12 million in government grant awards... which means that good old Uncle Sam is financially backing these glow-in-the-dark experiments.

With all of the government conspiracy talk floating around these days, one can easily imagine an America where certain "undesirables" are unknowingly injected with genetic material, perhaps genetic material that glows under black light, for instance.  One wave of a wand during a traffic stop or at the airport could alert your friendly neighborhood DHS or NSA agent that the "mark of the beast" is present, and the next thing you know, you just might find yourself rotting away in a secret government prison camp.

Over years, conspiracy theorists have imagined that the "mark of the beast" could be anything from a bar code tattooed onto our bodies to a microchip implanted under our skins.  If the government wanted to track and monitor certain individuals, these aforementioned methods would be somewhat impractical.  After all, implanting a microchip would involve abducting the chosen individual, rendering them unconscious, and then surgically implanting a mechanical device- and then hoping that the victim doesn't notice the surgical incision.

But injecting someone with genetic material, such as a material that glows under certain lighting conditions, would be virtually impossible for anyone to detect.  It could be surreptitiously injected into your body by your local family doctor when you get a flu shot, or by your dentist when he injects you with Novocaine.  It could be added to vaccines given to children.  And the scary part is that you will never know.

Before you scoff at the idea, consider this:

These glow-in-the-dark experiments are taking place during a time period in which our rights and freedoms are being stripped away at an alarming rate.  In September of this year, construction on the largest top-secret government facility in America will be complete.  The National Security Agency's Utah Data Center (officially known as the Intelligence Community Comprehensive National Cybersecurity Initiative Data Center) is a $2 billion facility designed to store intelligence data on the scale of yottabytes (for the record, one yottabyte is equal to 100,000,000,000 gigabytes).

And just what type of "data" will be collected and stored at this 1.5 million square foot facility?  It has been alleged that this data center will have the capacity to store every private email, cellphone call, and Internet search ever made or written.  Experts predict that the electricity bill alone for the Utah Data Center will run about $40 million a year, since the annual power demand will be in the vicinity of 65 megawatts.

Factor in the Affordable Care Act and other mandates which will grant the government total control of your body, and suddenly the idea of marking American citizens with glowing genetic material in an attempt to monitor our every move doesn't seem so far-fetched.