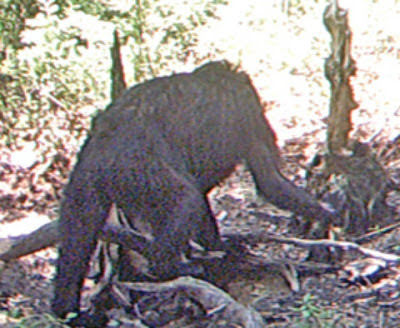 Every once in a while, even we are confounded and bewildered by the results of one of our own investigations.  Our analysis of the shaggy cryptid caught on a trail cam in Virginia is one such example.  The image of this mysterious creature, recently released by Roger William, has been creating quite a buzz around the Bigfoot and cryptozoology community in recent days, stumping even the most experienced cryptozoologists, and we believe that we may have solved the mystery of this creature's identity.

On August 27, the Bigfoot Evidence blog sought the opinion of Bizarre Zoology's Jay Cooney, who surmised:

"While the animal's stretched forelimb and apparent long hair made me wonder if this could be an actual wood ape, other features of its anatomy make it clear what its identity truly is. Its hind limbs/hind quarters make it obvious that this is a habitual quadruped, as they lack the hallmarks of biped anatomy such as calves and prominent gluteals. Simple comparative anatomy with black bears will reveal that the animal exhibits the hind limbs and feet of a bear, rather than those of a hominid. "

Cooney's analysis has been echoed by several other researchers, who also tend to favor the theory that the Viginia trail cam creature is a quadruped.  We at Journal of the Bizarre also agree with this fact; however, we believe that the creature in question is not a bear, but a ground sloth- an extinct quadruped mammal which last roamed North America 11,000 years ago. 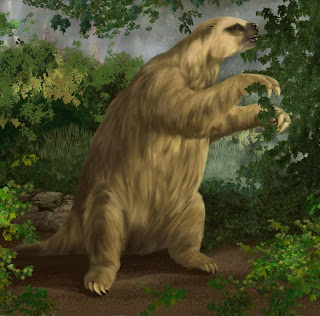 One critical aspect which researchers seem to have overlooked is the enormous tail, which has apparently been mistaken as the creature's hind leg.  However, a close look of the photo reveals that the creature's left hind leg is in front of the tree limb on the ground.  As you can see by the following photo, the creature's legs appear to be straddling the fallen tree limb. 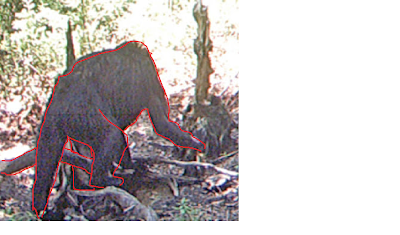 Once this is distinctive anatomical feature has been recognized, the pool of possible "suspects" shrinks considerably, so considerably, in fact, that the ground sloth is the only possibility.

Another tell-tale clue is provided by Bigfoot researcher Rick Jacobs, who states that the creature appears to have fingers, which are grasping the base of the tree limb.  This would obviously rule out the prevailing theory among cryptozoologists that the creature is a bear.  Sloths, on the other hand, have elongated claws used for gripping branches (much like in the trail cam picture) which could easily be mistaken for fingers.  The elongated arms also point to the tree sloth.

The final giveaway is the animal's fur, which appears to be more "shaggy" than that of a bear or a primate.  Of all the possible "suspects", the fur most closely resembles that of living species of tree sloths (the much-smaller tree-dwelling cousin of the ground sloth). 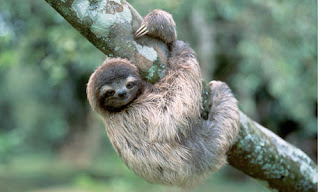 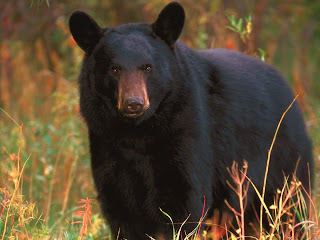 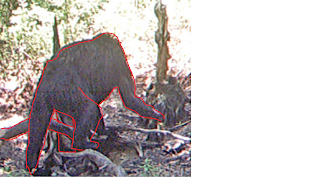 But how could this Virginia "Bigfoot" be an animal long believed to be extinct?  Our very own Marlin Bressi, crytozoologist and paranormal researcher, offers his opinion:

"Scientists believe that the North American ground sloth was hunted to extinction by humans roughly ten to eleven thousand years ago.  Unlike a species wiped out by a cataclysmic event, whose extinction cannot be questioned, species which have been made 'extinct' by the hand of man have a long history of re-appearing in the natural world.  Scientists refer to these animals as 'Lazarus species'.  Examples of these include the Arakan forest turtle of Asia and the Javan elephant of Southeast Asia.  Whenever an animal is said to have been hunted to extinction, the possibility of a few surviving members escaping from their predators always remains."

He also points out that fossilized remains of the North American ground sloth Megalonyx are frequently found in Alaska, British Columbia, and the Pacific Northwest- geographic locations long associated with Bigfoot.  Another smaller species, Pliometanastes protistus, also inhabited the southern United States.  Based on fossil evidence, experts believe that the Megalonyx ground sloths were capable of growing as large as elephants.

"The interesting thing about sloths is their ability to vocalize," Bressi adds.  "Since we have no examples of ground sloth vocalization, we can only speculate that the vocalization would sound like that of a tree sloth, but much louder and deeper based on it's size in relation to it's much smaller cousin.  The chirps and whoops and growls of the tree sloth, interestingly, are not wholly different from that of Bigfoot.  I believe it would be erroneous to imply that all Bigfoot creatures are ground sloths, but the trail cam photo from Virginia shows an animal which I strongly believe is a species of ground sloth."

"One question I am frequently asked is, 'If Bigfoot does exist, why haven't any bones been dug up?'  Well, bones of ground sloths are dug up all the time, so that may help shed some light on that mystery.  In fact, if not for ground sloths, the world of paleontology may look quite different today.  In 1796, Thomas Jefferson read a paper he had written on ground sloths to the American Philosophical Society, which in turn sparked the golden age of paleontology in America."

Bressi isn't the only person who thinks ground sloths might still be alive; In 1994, Dr. David C. Oren of the Goeldi Natural History Museum launched an expedition into the rain forests of South America in the hopes of finding a ground sloth.  Also, at the onset of the Lewis and Clark expedition, President Jefferson himself instructed Meriwether Lewis to keep an eye out for ground sloths, believing that some of these creatures were still living in the Northwest.

Update: Read Part 2 of our investigation into the Virginia trail cam creature.