Will Sandy Hook Become the Next Area 51? 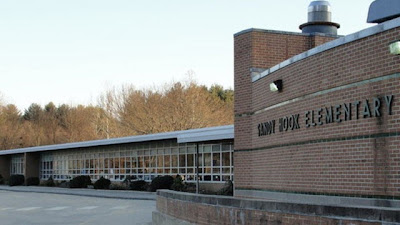 Last week, Connecticut's Newtown Bee printed a story about the scene of the Sandy Hook elementary school shooting, as it now appears more than seven months after the incident.  While the tone of the article manages to capture the disdain and hostility that the local citizenry seems to have for travelers wishing to pay their respects, the article reveals a more disturbing picture of America's most famous crime scene; a picture complete with concrete barricades, hidden cameras, chainlink fences, and "public servants" who like to run visitors out of town.

"There is no reason to go there.  There is no memorial," warns Zandra Thompson, a cashier at the Sandy Hook Deli.  According to the Bee's article, the deli sees three or four people a week attempting to visit Sandy Hook and pay their respects, some from as far away as the deep South.

Not far from the deli is the Sandy Hook Diner, whose owners claim that two or three travelers a week stop in to ask about the elementary school.  Like most visitors, instead of hospitality, these out-of-towners will be met with ire... and possibly even a police officer.

Dickinson Drive, which leads to the school, has closed off since the shooting, with huge cement barricades and menacing signs denying access to any and all (except, of course, local and government officials).  The Newtown Bee also writes of members from the Sandy Hook Volunteer Fire & Rescue who chase away anyone venturing too close to the school.  (Interestingly, JOTB was the first to discover that the Sandy Hook fire department received big bucks from FEMA several months before the shooting).

According to the Newtown Police Department, anyone who bypasses the barriers on Dickinson Drive is subject to arrest, and anyone who returns after having been warned to leave the property will suffer legal repercussions.

The Newtown Bee also describes how one elected local official even stalked an out-of-state vehicle which appeared to be headed toward the school so that it's passengers could leave behind mementos and express their condolences (which the local residents apparently do not want):

First Selectman Pat Llodra shared with The Newtown Bee a recent experience of her own that occurred about a week ago. Traveling down Riverside Road behind a vehicle with out of state plates, she saw them turn onto Dickinson Drive toward the old Sandy Hook School building. Mrs Llodra followed them as far as the barriers, where the passengers got out. She approached them and they told her they were there to see the school. Mrs Llodra had to inform them, she said, that the site was not open to the public, and they could not enter the grounds.

Access to Dickinson Drive, which leads to Sandy Hook Elementary School, has been limited to officials since the shootings. On January 4, 2013, Public Works employees placed huge cement blocks across the driveway to increase security at the crime scene, at the request of Newtown Police Chief Michael Kehoe. Those barriers remain in place, along with surveillance equipment and numerous signs warning that trespassers will be prosecuted.

From the sound of it, the site of Sandy Hook Elementary School is nearly as secure as Area 51, Fort Knox, and your typical high-security federal prison.  Why is there a need for such surveillance?  What in the name of sweet baby Jesus is going on in Sandy Hook?

One might assume that the goal is to preserve the memory of the victims but, if this is the case, the actions of those in Newtown go far beyond the norm.  Here in south central Pennsylvania, for instance, we have the battlefield at Gettysburg, where over 46,000 died beneath the blistering July sun.  Yet visitors are allowed to walk the grounds without fear of being stalked by local officials, threatened by firemen, or captures on government video cameras.  Even those who stray onto the battlefield at night are met with only a tired warning from a park ranger.  Even the site of the World Trade center, the hallowed Ground Zero, wasn't as guarded as this one tiny school in one tiny town in one of our tiniest states.

If you don't find that to be strange, then take a trip to Newtown for yourself and attempt to pay your respects.  Just don't be surprised when your car is tailed by a city councilman and an armed guard waves an assault rifle in your face and threatens to have you arrested for being on ground which is not (and never has been) private property.  Public streets and public schools are now off-limits, and all violators will be prosecuted.  Move along, folks, there is nothing to see here (except these concrete barriers, fences, menacing signs, hidden cameras, and armed guards).