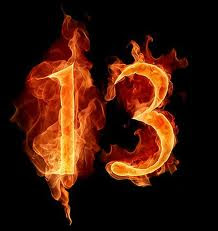 In 1897, a young man was executed by the state of Georgia for the crime of murder.  Terrell Hudson, the condemned, blamed his fate on the unluckiest of numbers, the number thirteen.  After his death, Hudson became something of a national celebrity, having earned the label of "The Thirteen Murderer":

Decatur, Ia., June 30. - Terrell Hudson, the famous "13" murderer, was hanged at 11:46 o'clock this morning. He was declared dead in 14 minutes. An immense crowd of howling negroes surrounded the jail while the execution was taking place.

Hudson's crime was the murder of Seaborn Malcolm in DeKalb County, November 13, 1896. The two were field laborers, and quarreled over a dog. Thirteen figured in the case to such a remarkable degree that Hudson was known at the "13" murderer.

When these facts and others became generally generally talked about, his superstitious friends deserted him in terror. Ignorant people want the authorities to burn his effects.