On Monday, the most detailed account yet of the Dec. 14, 2012, shooting at Sandy Hook Elementary that left 20 first-graders and six school employees dead was released by State's Attorney Stephen Sedensky, amid an outcry by Newtown parents to keep quiet about the incident, which many conspiracy theorists are hailing as the greatest cover-up since the JFK assassination.

The 48-page report, which includes 78 photographs of the school and the Lanza home, fails to provide a reason for Adam Lanza's actions or his decision to target the school.  Not surprisingly, nearly one year after the massacre, authorities refuse to provide any photographic evidence which shows Lanza entering the school, such as an image captured by the school's surveillance cameras.

Laughably, the 48-page "official report" provides the public with very little in the way of useful information.  Instead, the report contains such trivial "facts" as:

-Adam once forced his mother, Nancy, to get rid of the family cat.

-Adam would not allow his mother to put up a Christmas tree.

-Adam was a big fan of the popular arcade game "Dance Dance Revolution", and spent most of his Friday nights showing off his dance moves at a local theater- as recently as one month before the shooting (no, we're not making this up).

-In 2006, Adam stopped playing the saxophone.


If this is what constitutes a year-long investigation into one of the worst school shootings in history, then Stephen Sedensky should be tarred, feathered, and prevented from being within 50 miles of any legitimate law enforcement official.

After one year, authorities in Connecticut still can not find a motive, or provide one photograph of Lanza entering the building.  They did, however, learn a great deal about Adam's dancing abilities and saxophone playing.  No wonder the Sandy Hook parents didn't want this report released; it makes the entire incident seem almost, well, cartoonish.

The report does provide a few tidbits of information which will raise a few eyebrows among conspiracy theorists, however.

It was reported that Adam killed his mother with a .22-caliber rifle, and that an unnamed witness claims to have heard "two or three" gunshots.  The question of why no one had ever heard the shots that killed Nancy Lanza has been one of the mantras of the Sandy Hook conspiracy theorists, and now it appears that the official report was tailored (or doctored) to address this oversight.


Unfortunately, the official statements made by Connecticut officials do not appear to make any sense.

Rarely do residents mention the first person police said Lanza killed that morning: his mother, Nancy, who was shot in the head four times while she lay in bed.

According to police, Lanza shot his mother sometime between 8 and 9 a.m., using a .22-caliber rifle. Someone living near the Lanzas' home in a hilly, upscale neighborhood reported hearing "two or three" gunshots during that time.

Now, let's flash back to March 28, when the very same officials released the list of items seized from the Lanza home.  As you can plainly see in the picture below, under Item #21: 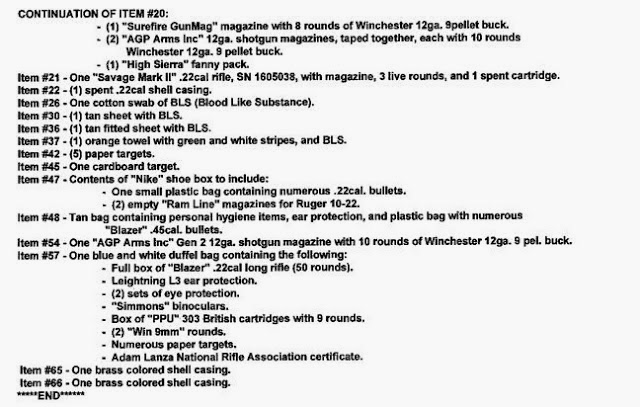 These documents were submitted to the Office of the Superior Court on Dec. 28, 2012, and prove that law enforcement officials found a .22cal rifle that was loaded with 4 rounds, only one of which was actually fired.
Strangely, ten days later, on Jan. 7, 2013, law enforcement officials submitted an addendum to the original list of items seized from the Lanza home.  Exhibit #625 is described as:

One (1) Volcanic .22 revolver starter pistol with 5 live rounds and 1 expended round. 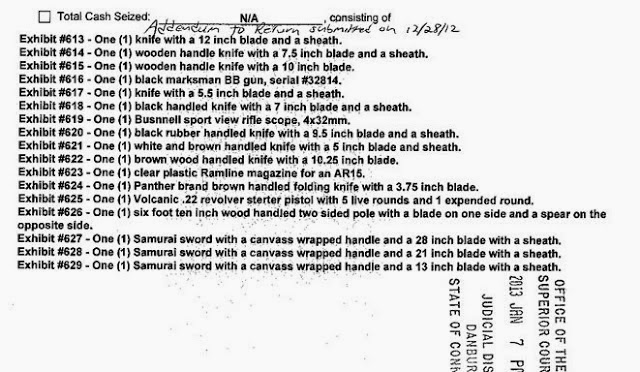 This means that, at most, Adam could have fired only 2 shots into Nancy Lanza (one from the Savage Mark II rifle and one from the Volcanic pistol).  Where did the other 2 shots come from?

Critics may point to the fact that Lanza used a .223-caliber Bushmaster XM15-E2S rifle during the school shooting, and that was probably the same gun used to kill Nancy Lanza.  After all, what's the difference between a .22 and a .223 bullet?


Well, the difference is a whole helluva lot.

The .223 bullet has 1.5 times the mass of the .22cal, and that extra mass is in the form of gunpowder, thus enabling the .223 to be propelled at a much, much higher velocity.  That is why twelve-year-old kids use .22 bullets in their Marlin rifles to kill squirrels and that's why the military uses the .223 in their M16 rifles to kill humans.

The idea that Lanza used a .223-cal rifle to kill his mother is beyond ridiculous for several reasons.  Since this bullet has 1.5x the gunpowder, it would produce a much louder bang.  Four shots would be enough to wake up the whole neighborhood- yet only one witness claims to have heard the shots, and that witness claims that only "2 or 3" shots were fired.  And then there's the laundry list of evidence seized from the Lanza home, which mentions only one spent shell casing... and that shell casing was from a .22 rifle.

Someone's not telling the truth.

Unless, of course, Lanza picked up three of the four spent shell casings after shooting his mother and somehow managed to hide them in such a way that every law enforcement official in the state of Connecticut was unable to find them.  And that scenario is about as likely as Pope Francis posing nude for the next issue of Playgirl Magazine.


After a year of "investigation", the only new details we have been able to learn about Adam Lanza is that he liked to play the saxophone and show off his dance moves.  Hardly sounds like the image of the misanthropic recluse painted by the authorities (the same authorities, coincidentally, that divulged Lanza's love for "Dance, Dance Revolution").  Yes, the same brooding outcast who was diagnosed with Asperger's syndrome and had "significant social impairments and extreme anxiety" had no qualms about busting a move in front of onlookers... as recently as one month before the shooting.

Lanza was also a huge fan of "Dance Dance Revolution," in which a player on a platform moves his feet as directed by a video. In 2011 and until a month before the shooting, he went to a theater and played the game "most every Friday through Sunday" for up to 10 hours at a stretch.-- LA Times, 11/26/13

Maybe the reason Lanza taped black garbage bags over the windows in his bedroom was because he feared someone was out to get him.  Possibly the same person who eventually killed Nancy Lanza-- since it's evident he was not the one who shot her.  And maybe that's why Nancy was in such a rush to move her and her son to Washington state, and maybe that's why the Lanza home was stockpiled with weapons and ammunition-- for self-protection.  Could it be that Adam targeted Sandy Hook as revenge for someone else killing his mother?


This theory is as good as any, since investigators still have no motive for Lanza's actions.

Perhaps the most interesting, yet under reported, aspect of the new 48-page report is the revelation that Lanza's computer contained information on the topic of pedophilia.  Read that sentence carefully.  Lanza's computer did not contain any pornographic or explicit images or videos-- it simply contained information about pedophilia.  This would seem to imply that Adam may have been a victim of sexual abuse, possibly as a young child attending Sandy Hook Elementary.  This would explain why he did not shoot up the local high school, but instead focused on the elementary school, and it may explain why he chose two of his targets- the school's principal and psychologist.  Both were employed by the school district during the time Adam Lanza was a student at the school.

Items in his bedroom and on his computer desktop included violent games... and information on mass killings and the topic of pedophilia.- LA Times, 11/26/13

Maybe, just maybe, Adam had once reported sexual abuse to school employees, who then pulled a Joe Paterno and turned a blind eye toward Adam's allegations.  As far-fetched as that theory may sound, it still makes more sense than anything presented by Connecticut officials and Stephen Sedensky.  But, then again, since these officials refuse to reveal any evidence placing Lanza at the scene of the crime, maybe not.  All we are left with are the facts.  Nancy Lanza was shot four times in the head with a .22 rifle, yet only one shell casing was ever found inside the Lanza home.  The bottom line is this, plain and simple:

There should have been either four shell casings inside the Lanza home, or Nancy Lanza should have had only one hole in her head.