The Strange Death of Margaret Smith 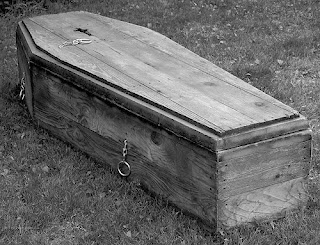 In 1908, a grandmother suddenly dropped dead after seeing the ghost of her grandson... whom she didn't know had died just hours before.  This spooky story was featured in newspapers all over the country; the following is an account of the strange incident as it appeared in the December 3, 1908 edition of the Daily Pioneer (Bemidji, MN).


New York, Dec. 2.-- The death of Mrs. Margaret Smith while she was visiting friends in this city has all the uncanny surroundings of a real ghost story.  Friends believe that she expired after seeing an apparition, for a moment before she fell to the floor the woman raised her eyes to the ceiling and exclaimed: "Why, Frank, where did you come from?"

Only a few hours previous Mrs. Smith's favorite grandson, Frank Kane, had died at his residence in West Sixteenth street, but Mrs. Smith had not been advised of it.

Physicians who examined the body pronounced her death as due to heart failure, but those who witnessed the dramatic scene think otherwise despite their non-belief in spirits or ghosts.  Mrs. Smith was a well to do widow and lived at Seaford, N.J.